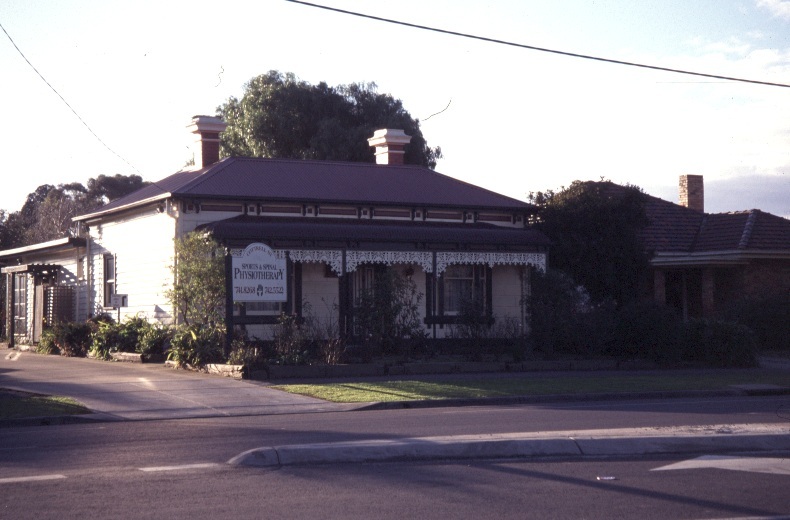 This former house and butcher’s shop, now used as commercial premises, appears to date from the 1890s, the time at which the valuation sharply increased.  However, it may incorporate earlier stages behind a later façade.

It is a double fronted timber Victorian house, symmetrical in design, with a central doorway and a large window (with side-lights) to either side.  The façade uses timber boards shaped to resemble stone, with weatherboards used on the side walls.  The verandah ironwork is quite elaborate.  Chimneys and other architectural details remain.

This house is of historical significance as one of the few remaining from the early Werribee township on the Mambourin Parish side of the Werribee River.  John Conron, butcher, occupied a shop and dwelling on this site (Crown Allotment 2 in Section 3, Parish of Mambourin) from the middle 1870s.  He leased the half acre allotment from John Beamish, farmer, from that time until the late 1880s.

From 1889, when Conron became the owner of the property, its valuation almost doubled, suggesting that there may have been some extensions or rebuilding at the time.  Later, perhaps after Conron’s death, from 1899 until 1916, Charlotte E. Conron was rated.  From this date the property was listed simply as a dwelling.

The Cottrell Street property seems to have remained in the hands of the Conron family over a long period.  Agnes Conron of 7 Elgin Street Newport was its owner in the middle 1930s, letting to Austin McDermott, labourer.  From 1935 until at least 1956, the Cottrell Street dwelling was owned and occupied by Thomas, John and Eileen Halliman.  It is now the Cottrell Street Sports and Physiotherapy Centre.