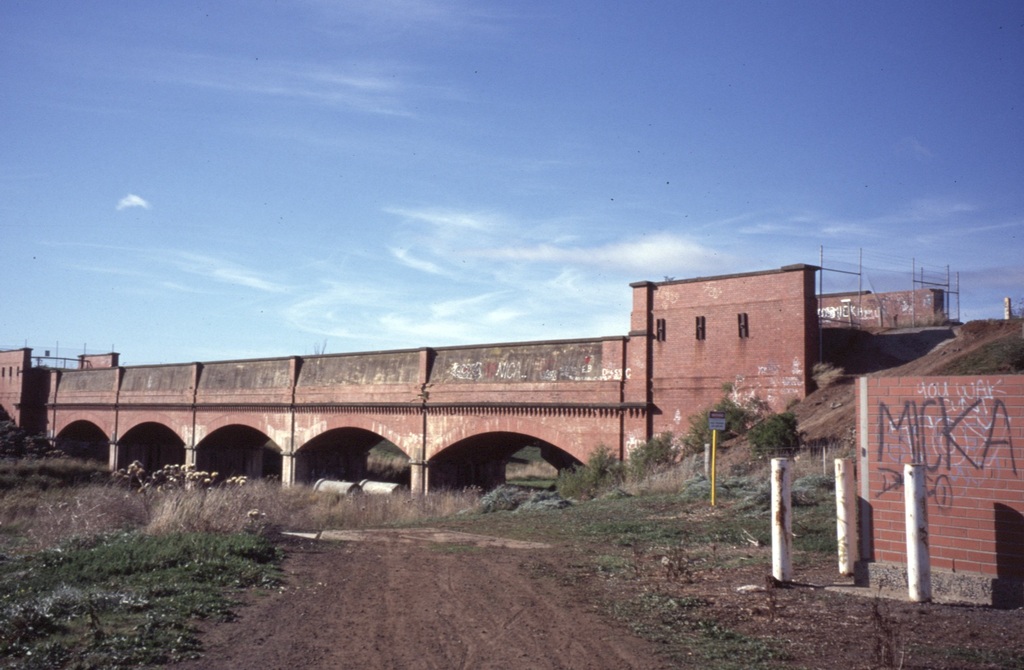 Development of the Werribee sewerage treatment system was a major public undertaking of the late nineteenth century.  It involved design and construction of the treatment facility (the Metropolitan Farm), the installation of ‘household’ sewerage infrastructure within the already built-up areas of Melbourne, and the creation of the main sewer and associated pumping facilities (the outfall sewer).  This citation covers the part of the outfall sewer within the Wyndham City Council area and the Metropolitan Farm.

The outfall sewer starts at the end of the rising main from the Spotswood Pumping Station (now Scienceworks).  The outfall sewer is partly underground and partly above ground.  There are brick and concrete viaducts across Kororoit and Skeleton Creeks and the Werribee River.  The Skeleton Creek viaduct (shown in the photograph) is a large brick and concrete structure, its catenary arches creating a strong form in the landscape.  It is simply and effectively detailed with rendered trim to balustrades and as string courses, and brick dentils.

The design of the Metropolitan Sewerage Farm was created around the technology for disposal of the sewerage – that is, its use to fertilise farming land.  This involved laying out the site, building a system of access roads, creating tree plantations on the boundaries, subdividing the land into smaller blocks suited to tenant farming.  Township sites were surveyed.  Most of the original 8847 acres was to be irrigated.   An early plan (1906) showed boundary plantations (tree reserves), a range of allotment sizes from 18 to 145 acres, a township site on Boundary (now Old Boundary) Road.

The role of the farm as an agricultural enterprise may tend to be overlooked.  However, it fitted well with Werribee’s orientation towards experimental farming and research.  The scale and single management of the Farm also created a distinctive farming landscape.  It is now a dominant and important element in the Werribee landscape.

One feature within the Farm, a large water tank which once held water for the city and since 1892 has been located at the Werribee site, has long been recognised as of heritage value, and is listed on the Victorian Heritage Register and the Register of the National Estate.

The Metropolitan Farm (originally called the Melbourne and Metropolitan Board of Works Sewerage Farm) was established in late 1891, only one year after the formation in 1890 of the Melbourne and Metropolitan Board of Works (MMBW).  This Board had been formed following the report of the Royal Sanitary Commission in 1888 on the means of alleviating the insanitary condition of Melbourne.  James Mansergh, a visiting British sanitation engineer, proposed the land treatment system that had proved successful in Britain, France and Germany.

The Board preferred to establish the scheme at Werribee rather than Mordialloc, reputedly because the land west of the Werribee River in the Parish of Cocoroc was cheaper.  About 8,847 acres was secured, land mainly owned by the Chirnside’s, which became available after the death of Thomas Chirnside in 1887 and Andrew Chirnside in April 1890.  Andrew’s sons broke up the huge Werribee Estate for closer settlement in subsequent decades.

The first sod of the Outfall Sewer at Werribee was turned on 19 May 1892.  The site was laid out, a system of access roads built, there were tree plantations along the boundaries, and the farm was subdivided into small blocks suited to tenant farming.  The Metropolitan Farm (as the farm was renamed in 1896) was officially opened by the Governor of Victoria, Lord Brassey on 5 February 1898.  The sewage was brought to Werribee via the Spotswood Pumping Station, and later discharged into Port Phillip Bay.

A 1906 subdivision plan shows the layout of the Sewerage Farm with a range of allotment sizes from 18 to 145 acres and boundary plantations.  The MMBW Sewage Farm is indicated on a 1907 Feature Plan of the Werribee Park Estate.

The suburban expansion of Melbourne in the first decades of the 20th century hastened the development of the Werribee complex.  The first additions commenced in 1912 when 305 acres were acquired to establish settling pits to accommodate excess winter flows which could not be handled by irrigation.  In 1913, 252 acres were purchased on the western boundary.  In the following year a further 811 acres ere acquired, bringing to 9910 the total acreage available for sewerage treatment.

More land was acquired in the 1920s and in the post-Second World War period.  This land was acquired from the Chirnside’s, the Closer Settlement Board and other landowners.  The area west of Farm Road, excluding Crown Allotment 22A (Section VI) was purchased from S. Tinkler in March 1921; this represented an addition of 583 acres.  Later, in January 1928, Allotment 22A, comprising 17 acres, was purchased from E. M. Purnell.  The area east of Farm Road was acquired in two main sections: the frontage to Maltby Bypass in 1927; and Crown Allotments 10A, 23A and 24 (Section VII) in 1947-49.  By 1961 the Metropolitan Farm had tripled in size.

Treatment methods changed over the years.  Prior to 1930, sewage which could not be dealt with on pasture areas was discharged into Port Phillip Bay.  In 1930 grass filtration was adopted to deal with peak wet weather flows.

Another aspect of the complex was the sanctuary for native fauna established in 1921, “when 12,077 acres of the Farm was proclaimed a sanctuary for the protection of bird life”.

In the early 1960s, according to one account, there were still over 320 men “constantly employed on sewage disposal and farming activities, many of whom live with their families in houses on The Farm”.