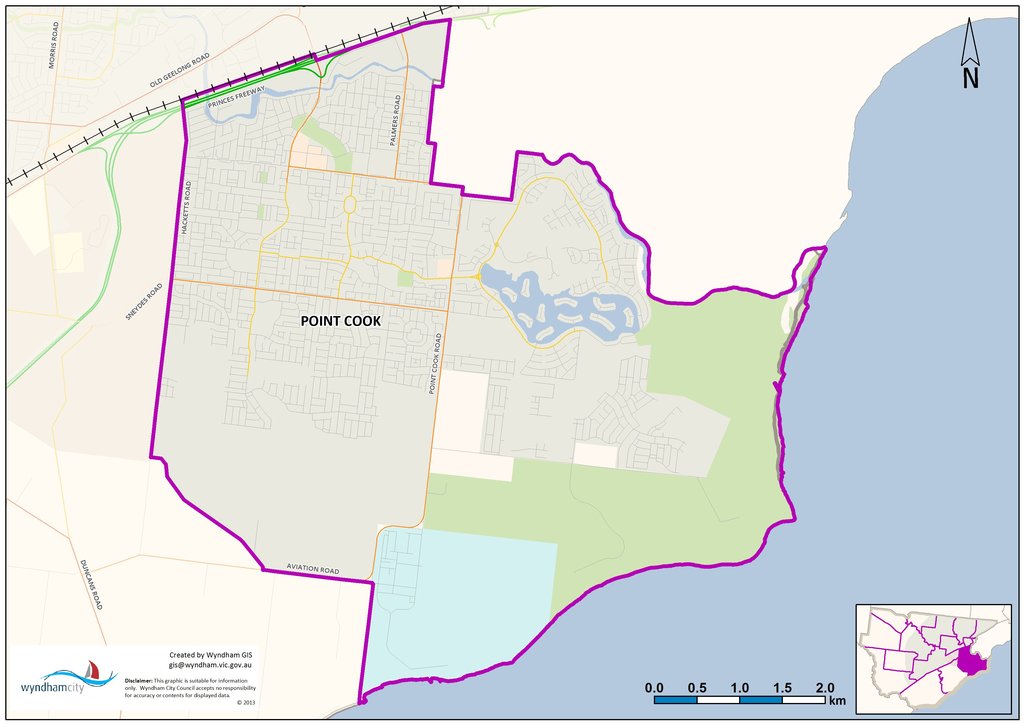 Point Cook was named after John M. Cooke, a ship’s mate on board H.M.S. Rattlesnake under Captain William Hobson, who brought Captain William Lonsdale to Port Phillip in 1836.

Although officially named Point Cooke, in common usage the last letter ‘e’ is not used.  It was known as Point Cook as early as 1853 when pioneer grazier and horse-breeder Thomas Chirnside took over the farmlands and began to build his homestead, which he occupied from 1857.

Early history: The Chirnsides were very keen of hunting and coursing and released foxes and rabbits, imported from England, at Point Cook. The Melbourne Hunt Club and Geelong and District Hunt Club were invited to ride with the Chirnsides on their Point Cook property.  Thomas Chirnside was also very keen on racing and imported thoroughbred horses from England for breeding at the extensive stables he built at Point Cook where he also had three race tracks.  After selling the remainder of their Point Cook properties to Sydney Dalrymple in 1920, ending Chirnsides’ 70 years ownership of Point Cook, four years later Dalrymple sold the northern section to the Cheetham Salt Company for salt recovery lagoons. Salt evaporating ponds were established and remained until the early 1990s when the Victorian Government purchased the site.  The higher, western part has been given over to residential development, including the private development at Sanctuary Lakes.  The lower, bayside area has been conserved as Cheetham Wetlands—a natural environment that has become a haven for migratory birds and other native wildlife.

Air Force Training School, Point Cook: In 1912 the Australian Federal government purchased 734 acres from George Chirnside for the establishment of an Air Force Training Base at Point Cook. Here the Australian Flying Corps was formed.  After the success of the corps during the First World war, the RAAF [Royal Australian Air Force] was also formed at Point Cook, and remained the only air base until 1925 when facilities at nearby Laverton and Richmond, New South Wales were established.  Today Point Cook is considered the spiritual home of the RAAF and houses the RAAF Museum, RAAF College and Officer’s Training School.

Development: Point Cook is one of the fastest growing suburban developments on Port Phillip Bay. Streets with new houses seem to appear overnight.  It is said that in Wyndham City the number of babies who will shortly fill a kindergarten class are born every week. The problem for suburban developments such as Point Cook is that rapid development, and population growth, soon outstrips infrastructure.  Although Point Cook has a well-serviced shopping precinct, with well-appointed public amenities, local residents have been campaigning for much-needed public transport and recreational facilities.

Point Cook Action Group: A group of local citizens unhappy with the lack of planning for, or provision of, State Government infrastructure in particular, have come together to pressure the Government to act.  Lack of public transport has been a big issue, as has traffic management, with residents complaining that it can take 40 minutes to get out of the suburb, whereas it takes only 20 minutes to get to the City of Melbourne just 10 kms away.  However, most new residents find rural lifestyle by the bay, where friends are made of neighbours, and a real sense of belonging to the local community overrides difficulties with peak-hour traffic and over-crowded trains.

In 2011, Wyndham City CEO Kerry Thompson noted that Point Cook was the growth suburb in the City with housing numbers increasing by 32.8 per cent between July 2010 and July 2012.

The Australian Grand Prix was run at Point Cook RAAF Base in 1948 and was won by Frank Pratt in a BMW 328.

Ronald, Heather B. Wool past the winning post : a history of the Chirnside family, South Yarra, Landvale Enterprises, 1978.