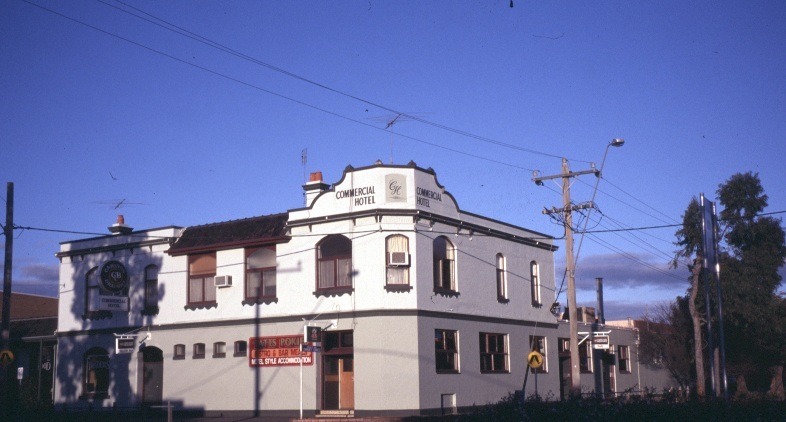 The two storey Commercial Hotel is located on a prominent corner site in Werribee’s main shopping street.  The hotel has been a landmark for many years.  As with many hotels, the use has continued but the building has undergone various stages of development and change.

The present building appears to date from the early years of the 20th century.  It is set facing the corner, with the traditional entry to the main bar now off-set to the Watton Street façade.  The upper floor is the least altered, retaining a series of arch-head windows, moulded string-course and parapet detailing.  The tiles on the exposed roof section have been replaced with a darker glazed tile and most of the window frames have also been altered.

This hotel, located on the south-east corner of Watton and Bridge Streets, had a long association with the O’Connor family.  Richard O’Connor, early district storekeeper, reputedly built an earlier hotel on the site in 1869 called the Railway Hotel.  In 1875, he gave up storekeeping but kept the hotel.  By the middle 1880s, the Railway Hotel, (in Allotments 1 to 4 in Block 21 in the Werribee township) was owned and occupied by Richard O’Connor, hotelkeeper.

O’Connor changed the name of his hotel to the Anglers Hotel in the 1890s.  Its valuation had increased to £108 by this time.  It continued at that valuation until about 1904.

According to a Werribee and District Historical Society publication, at this time O’Connor announced his plans for rebuilding the Anglers Hotel.  Shire rate records confirmed that there was a substantial increase in valuation between 1905 and 1906.  In September 1907, Richard O’Connor’s death was reported in the district press.  The article told how he was born in Ireland and first came to Victoria in 1861.  He was employed on the Wattle Park estate but then went to the goldfields in Otago New Zealand.  On his return, O’Connor married and opened a store at Werribee.  The article told of how he built the Anglers Hotel and was a promoter of the Werribee Mechanics Institute and was treasurer of St Andrew’s Roman Catholic Church for 40 years.  He was buried in the Werribee Cemetery.

By 1910 there was another name change to the Commercial Hotel the present name.  In that year the property was owned by O’Connor’s executors and occupied by Johanne Cooke, Licensed victualler.

A 1920 description of O’Connor’s hotel survives in the sale notice for the O’Connor estate following a subdivision in that year.  It was announced that the hotel, shops and houses were for sale in “the main business street of the township and close to the railway station”.  The Commercial Hotel was described as “a two-storey brick building with balcony, overlooking the Werribee River; it contains 22 rooms.  There is also good stabling, loose boxes, feed-house, sheds, and all necessary hotel conveniences.  Electric light and water are laid on, also very large underground tank.  The whole of the buildings, both inside and out, are in splendid condition”.