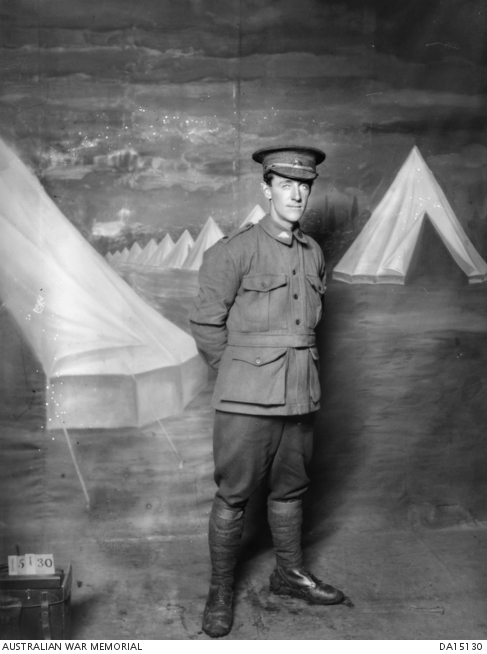 Studio portrait of 5671 Private (Pte) Henry Joseph Delaney, 7th Battalion. A grocer from Werribee, Vic prior to enlistment, Pte Delaney embarked with the 18th Reinforcements from Melbourne on HMAT Ayrshire on 3 July 1916. On 27 April 1917 he was killed in action on the Somme, aged 26, and is commemorated on the Villers-Bretonneux Memorial. This is one of a series of photographs taken by the Darge Photographic Company which had the concession to take photographs at the Broadmeadows and Seymour army camps during the First World War. In the 1930s, the Australian War Memorial purchased the original glass negatives from Algernon Darge, along with the photographers' notebooks. The notebooks contain brief details, usually a surname or unit name, for each negative.

Before enlisting in the A.I.F. on 10 February 1916, Harry Delaney was a grocer with Comben & Co., of Werribee. He was born at Kapunda in South Australia in 1890, and at an early age his family relocated to Werribee.

His parents were William Michael Delaney, and Eliza Jane Pollard, and his siblings were:

War Service
After enlisting, Harry was on strength with the 7th Battalion, 18th Reinforcements at Broadmeadows. Then within a month of enlisting, he embarked from Melbourne on H.M.A.T Ayrshire, bound for Plymouth. After arriving on 2 September 1916, he joined the 2nd Training battalion.

He took some unauthorised Christmas leave by going Absent without leave for 10 days between the 19 and 29 December 1916. This cost him 11 days in detention, 2 days in custody, and a loss of 24 days pay.

In some documents, Harry is referred to as a Signaller. He probably received this training  while in England, early in 1917.

On 10 April 1917, Harry moved to Etaples in France, and was taken on strength at the 7th Battalion. Eleven days later he was killed in action on the Somme, France.

Henry has no known grave, and is commemorated at the VILLERS-BRETONNEUX MEMORIAL, in France.

The death of Henry Delaney was reported three times in the Werribee Shire Banner:

Arbor day was celebrated last Friday at the South Cocoroc State school. Although the weather was cold, the rain kept off, and all enjoyed themselves immensely.

A number of trees were planted, and one specially interesting item was the planting of a tree (a Cootamundra wattle) in honor of two fallen heroes in France, previous pupils of the school, Messrs. Edwin and Henry Delaney. This event was per formed by two little dots, Miss Eileen Robinson and Master Vincent M'Grath, the two youngest children in the school. The children then formed a circle round the tree and sang "God save our splendid men."
Werribee Shire Banner, 5 July 1917, p.3.

3. Editorial
The sad intelligence has just been received that Signaller Harry Delaney has been killed in action in France. He was a fine type of a young Australian soldier - clever, alert, resourceful, and energetic - and in his examination for signaller received the highly satisfactory percentage of 99. Born in South Australia, he came to Werribee with his parents while still a baby, where he grew to manhood, being loved and respected by all who knew him. He was for some years in the employ of the Werribee Farmers' Co-Operative Store, and later of Comben and Co.'s, whose employ he left to enlist. His duties brought him in touch with the majority of the residents of the town, and we can safely say that he was one of the most popular young men in the district. Two of his brothers having previously enlisted he was never satisfied till he himself was in khaki, and he sailed on the 3rd July, 1916, the day on which his brother fell a victim to the enemy's guns. After a few months in England he sailed for France but recently, and it is indeed sad to think that he has been cut off so early in his endeavor to serve his King and country. Much sympathy is felt throughout the district for the deceased soldier's parents, Mr. and Mrs. M. Delaney, and his brothers and sisters, in their sad bereavement."
Werribee Shire Banner, 17 May 1917, p.2

Henry had two brothers who also enlisted in the A.I.F.

No. 3082, Private Michael Delaney, who contacted Tuberculosis while in France, and was returned to Australia and discharged on 07 June 1918.