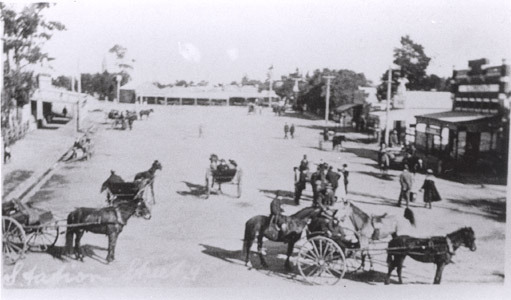 The next building was a tailor's shop commonly known as "Eddy the Tailor" and was owned by Sam Eddy. This building was later converted to a fruit and sweet shop operated by Mrs. Bill Stewart. It was then shifted to the rear of the block and a new premises built by Vince Montalto, who in partnership with Mrs. Hassett operated it as a milk bar/green grocers. This was later closed and converted to a chemist run by pharmacist Peter Ross and his wife who was also a pharmacist.

In the background is Edwards grocer shop, later O'Toole's, that has now been demolished to be replaced by Ballan House.

Next on the right hand side of the photograph is Maguires men's hairdressers, then Callan's ham and beef shop, then a drapery, then Douglas' cafe which became Muracca's milk bar. Then the National Bank which became Pettit's paint shop. Next is Sampson's Farrier Shop now Callanan's vacant land.

Not to be reproduced without permission from the Werribee and District Historical Society.

Publication quality prints can be purchased from the Werribee and District Historical Society.