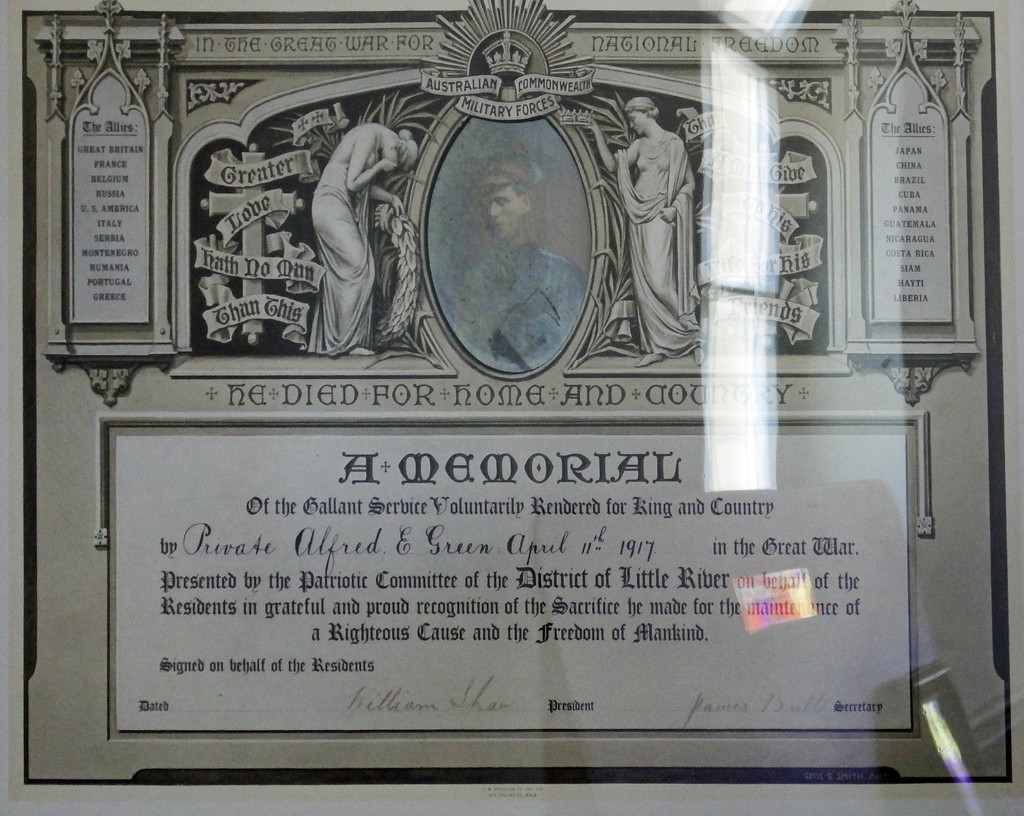 No known grave, but remembered at the Villers-Bretonneux Memorial, Somme, France.

War Service
He enlisted in Melbourne on 6 March 1916 and spent the early part of his service at the Depot Battalion at Geelong.

His brother, William John Green, also enlisted in the AIF on 8 January 1916.

He was assigned to the 4th Reinforcements, 46th Infantry Battalion in July 1916.  A month later, the Battalion boarded RMS Orantes and sailed for England, disembarking at Plymouth in early October.

Alfred Green and his mates were sent to join the 12th Training Battalion based at Codford on the Salisbury Plain in Wiltshire.  During the war, thousands of ANZAC soldiers passed through this camp that was used as a staging and training facility before they were sent to the front line in France.

Private Green was sent to France on 4 December 1916 where he was officially taken on strength with the 46th Battalion in March the following year.

The 46th Battalion was formed in Egypt in February 1916.  Half its contingents were veterans from Gallipoli – the other half, fresh recruits from Australia.  It had served with distinction at Pozieres in August 1916.

In 1917, the 46th Battalion was involved in the first battle of Bullecourt in northern France.  The Germans had consolidated its defences into what became known as the Hindenburg Line and Bullecourt was a heavily defended village at its very heart.

The attack by the 46th Battalion on 11 April 1917 was the first assault by Australian forces on this newly fortified position.  It resulted in the heaviest casualties suffered in a single action by an Australian brigade during the First World War – 2239 killed, wounded or missing in action out of a total force of just 3000.

Private Alfred Green was killed in action on the first day of the assault. Although his place of burial is unknown, he is remembered at the Villers-Bretonneux Memorial in the Somme.

One of the mysteries surrounding Private Green’s service is a notation in his records that he was to receive the Military Medal for an act of bravery during the assault on Bullecourt.  Elsewhere in his records, an entry says that the commendation was an error.

A small article was published in the local press regarding Alfred Green being missing in France.
Werribee Shire Banner, 24 May 1917 p.3


Lest we forget
Bibliography