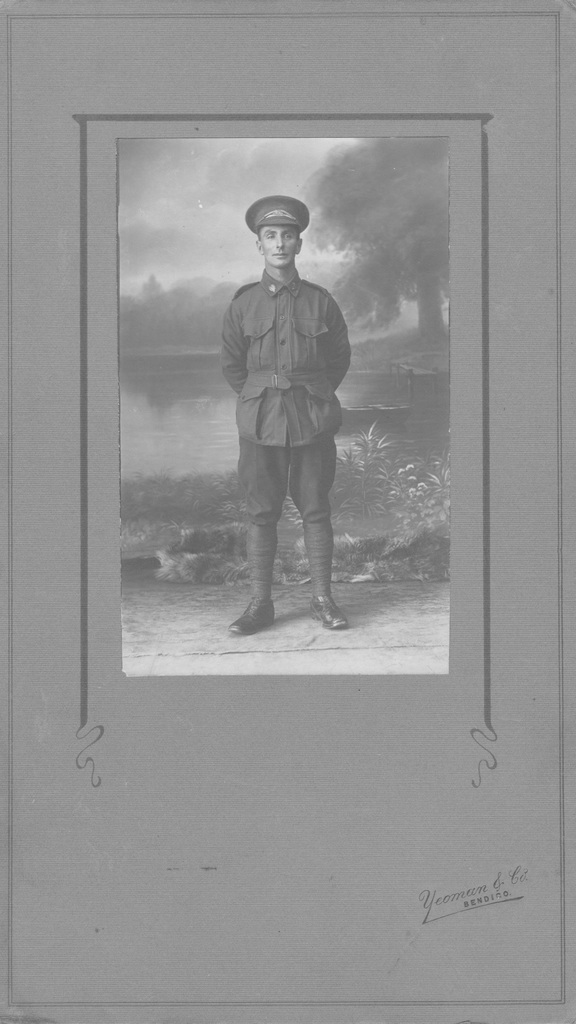 No.5666A  Corporal William Carter
William Carter was born in Caulfield on 16 November 1886, to Joseph Carter and Jane Cunningham. They had married in the same year at Caulfield, in Victoria.  His sibling, Ada Carter, was born in 1888 at Yan Yean, and died in 1915.

At the age of 13 years, William began attending the Grammar School at Caulfield.

William Carter married Ethel May Benbow (1893-1979) at Caulfield in 1911.  They had three children:
At the time of his enlistment in 1916, William Carter was working and living in Kyabram.  His wife Ethel was living with their three small children at Eaglehawke, Bendigo, to be near her parents.

War Service
William Carter applied to enlist in the A.I.F. at Melbourne on 21 February 1916.  The previous day he had undertaken his medical examination at Kyabram, in central Victoria. In his embarkation documents, Kyabram was recorded as his home address, (which had been nominated on his date of enlistment).  He was sent to the Broadmeadows Camp for initial training, part of which was spent with 'B' Coy of the 22nd Battalion at Royal Park.  He completed his training on 28 April 1916, and was appointed as a Private to the 7th Battalion, 18th Reinforcements, with the Regimental Number of 5666.

Private William Carter embarked at Melbourne on 3 July 1916 per H.M.A.T Ayrshire A33, as part of the 7th Infantry Battalion – 13th to 23rd Reinforcements.  They disembarked at Portsmouth in England on 2 September 1916.  During the voyage, William was admitted to the ship’s hospital for 15 days (from 11-25 July 1916).

It was at this time that the suffix "W" (wounded) was added to William Carter’s name on the Werribee Shire Council’s Roll of Honor board.

On 15 September 1916, William and the 18th Reinforcements marched in to the 2nd Training Battalion at Perham Downs in Salisbury, England for further training.

While at the camp, William was charged with being absent without leave (A.W.L.) for 8 hours between midnight and 8.15am on 23 October 1916.  For this action, he was awarded 24 hours in detention.

On 2 November 1916, William embarked from Folkestone England, to proceed to the 1st Australian Base Depot (A.D.F.D.) at Etaples in France. From there he marched in to the 59th Battalion, arriving at Etaples on 17 November 1916.

On 8 December 1916, William was admitted to the 5th Australian Field Ambulance suffering with bronchitis.  After treatment, he was transferred to the ANZAC G.R. Station, and he was able to return to duty with the 59th Battalion at Ribemont in France, on Christmas Eve, 1916.

It was at this time that Private Carter was almost wounded. He wrote a letter to his parents (which was quoted in The Werribee Shire Banner, 1 February 1917, p.2) in which he describes how he and four other Australian soldiers were subject to an exploding German shell.  One soldier was killed, three were wounded, and he only received concussion after being thrown to the ground.

Later that month, on 9 February 1917, William received treatment by the 1st S.M.D.C.C.S. for influenza.  His Battalion was then on the Front Line near Lark Hill.  On the next day he was admitted to the 14th General Hospital at Wimereux in France, who treated him for 3 days, before he was transferred back to England for treatment at Horton Hospital. There he was diagnosed as suffering from nephritis (an inflammation of the kidney), and he received treatment until 5 March 1917.

William’s next of kin were advised by the A.I.F. that he was suffering with nephritis on 16 February 1917.  To aid his recovery, William was given two weeks leave, before reporting back to the No.1 Training Depot at Perham Downs. There he was Classified as 'B1A' (fit for light duty only, for four weeks).

William was taken on strength with the School of Farriery at Romsey, between 18 June 1917 and 25 August 1917. This would have made use of his civilian occupation.

On 24 August 1917,  William attended and qualified as a "cold shoer" at the School of Farriery, at Romsey.

On 18 November 1917, William was charged with being out of bounds, in that he was found in Codford Village at 10.35 p.m. without a pass. The outcome was that he forfeited 3 days pay.

It was around this time that William Carter received a gift from the Werribee Red Cross. [see note below]

Driver William Carter returned to France on 27 April 1918, via Southampton. He arrived at Rouelles on 2 May 1918, and marched out to the 3rd Army Brigade Australian Field Artillerty Section (A.B.A.F.A.) [First World War A.I.F. supplies and Transport Unit] on 29 June 1918.  [They were a forward supply unit, and on a typical day, they would send out five lorries of general supplies, five lorries of ammunition, and one lorry of Y.M.C.A. stores, to units on the front line.]

On 13 February 1919, William was promoted to S.S. Corporal. This appears to have been a special rank, within the Supply Section of the A.I.F.

T/S/S Corporal Carter was then permanently detached to the 1st Divisional Ammunition Company (D.A.C.) on 28 February 1919.

On 28 March 1919, he was granted leave in the United Kingdom from France.

William finally left France on 24 April 1919, when he marched out from A.B.D.I. to return to  England, and embarkation to Australia.  He disembarked at Southampton on the following day.

S.S. Corporal William Carter embarked for Australia per Ormonde on 16 June 1919, and the A.I.F. advised his family of his sailing on the same day.  He disembarked at Melbourne on 1 August 1919.

Post War
William Carter and his wife Ethel May Carter were recorded in the 1919 Electoral Roll as living at 69 Hopkins Street, Footscray. He was listed as a soldier.

William was discharged from the A.I.F. on 16 December 1919 as Medically Unfit because of his disability with nephritis.  There was a note on the back of William’s Discharge Certificate stating that he intended to reside on the Metropolitan Farm, at Werribee.

There is another note in his service file, in which William advised the Army that he became sick in June 1934, and that he had lost a lot of his belongings.  He was writing from Footscray, and stated that he had previously been living '"in the country".

He died on 1 June 1951, and was buried at the Footscray Cemetery.

Notes:
1. Private W Carter sent a letter of thanks and appreciation to the Werribee Red Cross, for a gift that they had sent to him. That was reported in The Werribee Shire Banner, 3 January 1918, p.2.
2. The name "W. Carter", who previously worked on the Metro Farm at Werribee, first appeared on the Roll of Honor, published in The Werribee Shire Banner, 13 April 1916.
3. The same "W. Carter" had the suffix "W: (for wounded) added to his name on the Roll of Honour published in The Werribee Shire Banner, 3 August 1916.
4. "W. Carter" is a late entry on the Church of England Honor Board.
5. A.I.F. Medical Catagories
Category A was for men who were fit for Active Service;
Category B - men fit for certain kinds of service;
Category C – men fit for service in England;
Category D – temporarily unfit but likely to become fit after treatment &
Category E – those who should be discharged.
B1A2 was fit for overseas training camp in three to four weeks.
B1A - fit for light duty only – 4 weeks.
6. A.I.F. abbreviations
A.B.D.I. – Able Bodied Driver
S.S. - Supply Special – Army Service Corps supply tradesman number prefix