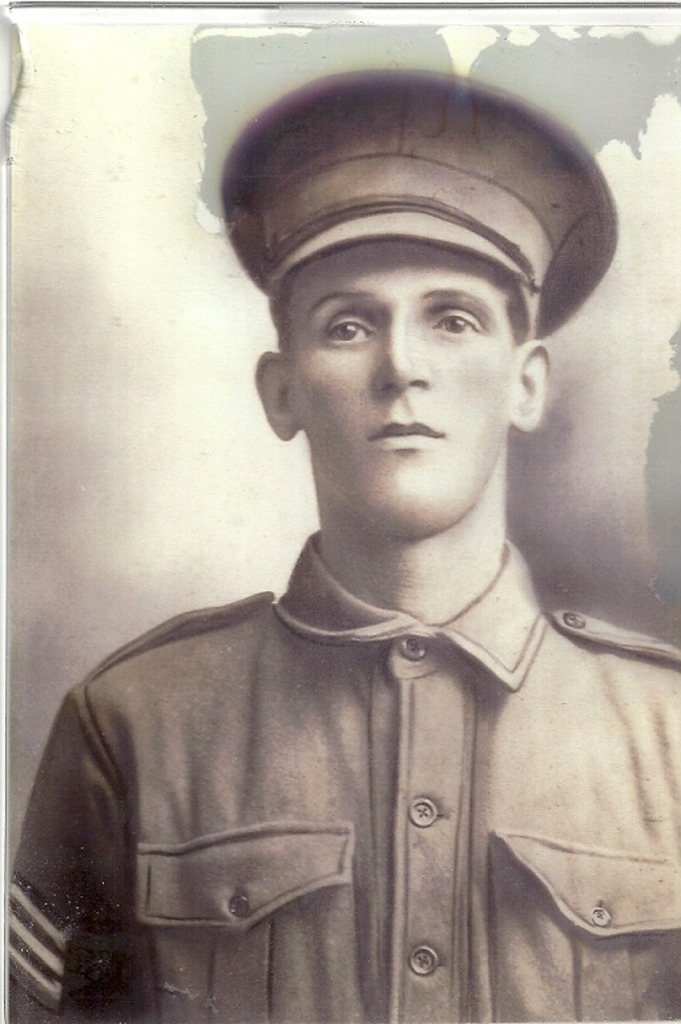 At sea (from England to Australia)

No.2503  Sergeant Robert Marines Harvey
Robert Marines Harvey was born at sea on the 26 August 1882 to William and Grace Harvey (nee Watson). They were travelling from England to Australia on the ship Corona. Robert had four brothers:
He also had five sisters:
The family appear to be living in South Australia from 1882 to the birth of Jane in 1886 and then when Grace is born in 1889 they are living in Port Melbourne and then moved to Footscray.

Robert married Mary Jane Iverson in 1901 in Victoria and they had four children:
All appear to have been born in Footscray.
[Jane (Robert’s sister) married Robert Swalwell in 1908, who also enlisted in the army in WW1 and was killed in action on 3 May 1917].

War Service
Robert enlisted into the Army at Melbourne, Victoria on 29 May 1915. He was 33 years and 10 months and he was 5 feet seven and a half inches tall.  Robert weighed ten stone and two pounds with a chest measurement of thirty five to thirty seven inches.  His complexion was fresh, with brown eyes and black hair.  He had a tattoo on his right forearm.  His next of kin was listed as his wife, Mrs Mary Harvey of Somerville Road, West Footscray, Victoria.  All of this was recorded at the time of his enlistment.

He was a member of the Footscray Rifle Club and was part of the Garrison artillery for over a year. Robert joined 6th Battalion at Lemnos on 31 October 1915. He disembarked at Alexandria, ex-Lemnos, 7 January 1916 (general Gallipoli evacuation), he then transferred to 58th Battalion on 17 February 1916.  He was promoted to Corporal at Tel el Kebir on 22 February 1916 and then Sergeant, Ferry Post on 15 May 1916.  He embarked at Alexandria to join the British Expeditionary Force, 17 June 1916; and disembarked Marseilles, France, 23 June 1916.

Second statement: 3144A J. SALT, 58th Bn, C Company, 58th Bn (patient, 3rd Southern General Hospital, Oxford, England), 12 February 1917: "I knew Sergt Harvey (58. A.) attached Grenadiers.  All the Grenadiers know that he was killed on July 19th out in No Man's Land during the charge at Fromelles.  The German lines were 500 yards from us, and we only got as far as their wire, and then we came back".

Third statement: 2228 Pte S.S. ROBERTSON, 58th Battalion (patient, No 1 Australian General Hospital, Rouen), 26 February 1917: "He belonged to A. Coy. We went over that Evening (sic). The attack was an utter failure, our Casualties (sic) being very heavy. I saw him lying out in "No Man's Land," wounded. I passed close to him, and as I passed he waved his arm. I know no more".

Robert officially was killed in action on the 19 July 1916 at Fleurbaix, France (Battle of Fromelles) aged 35.  There is no known grave for burial but there is commemoration plaque for him at V.C. Corner (Panel No 13), Australian Cemetery Memorial, Fromelles, France.

Robert's father, William Harvey received a letter from Private R. A. Raine which provided him with a brief account of his son's last moments, it was dated 26 May 1917 from France and is saved in his army records.  Private Raine’s words at the end of the letter said, "though perhaps nothing will compensate you for the loss of your son it may be some little consolation for you Sir to know that your son was held in high esteem by all the men in his Company and he died like a HERO".