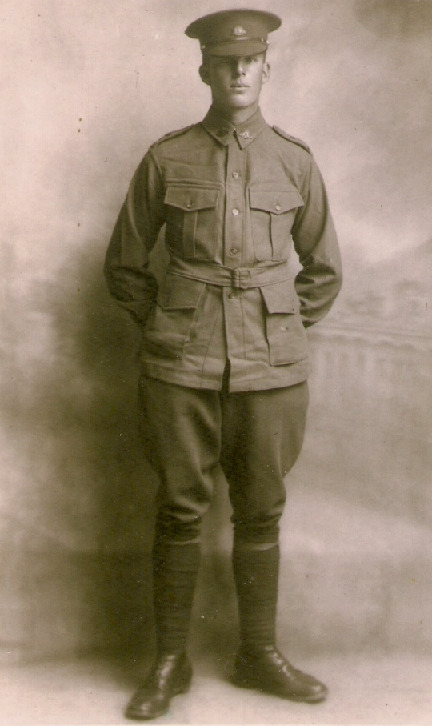 War Service
By the time he enlisted on 19 February 1915, his parents, William and Louise, had relocated to Laverton.  Alfred was single, working as a labourer and aged just 20 when he volunteered for service.  He was assigned to C Company of the newly-formed 22nd Battalion and following a period of basic training at Broadmeadows, he and his mates boarded the HMAT Ulysses on 8 May 1915 bound for the Mediterranean.

Alfred and his unit were part of the reinforcements who landed at Gallipoli on 5 September 1915 between 2.30am and 6.00am.  The Battalion had left Alexandria in the early hours of 31 August 1915 bound for Lemnos, an island in the northern part of Greece and then onto the Dardanelles.  On arrival, the Battalion marched two miles (3.2kms) inland to the front line near Lone Pine.  It must have been a sobering if not horrific introduction for these men on their first taste of active service as they found themselves in trenches still littered with dead soldiers, a profusion of bones and the stench of rotting flesh. The battle for Gallipoli had raged since 25 April 1915 and the human cost on both sides had been substantial.  The 22nd Battalion performed defensive duties in positions north of Anzac Cove and stayed on post until the final evacuation of Gallipoli in December 1915.  From there, the battalion was sent to Egypt to regather its strength before joining the British Expeditionary Force (BEF) in France.

In March 1916, Private Alfred Newland was sent to the School of Instruction – first steps in the army pathway for promotion and the road to an eventual commission as an officer.  During the same month, he was promoted to Sergeant, sent to France and was taken on strength with the 6th Australian Machine Gun Company, part of the 2nd Australian Division.  For the next three months, Sergeant Newland and his colleagues were either undergoing intensive training or serving in the front line, mostly in the Somme region. On July 1, the BEF launched its Somme offensive with British troops suffering 58,000 casualties on the first day – around one third of whom were killed. Towards the end of July, the Australians were called into action at Pozieres Ridge – described by Charles Bean, journalist and official Australian war diarist and historian, as “more densely sown with Australian sacrifice than any other place on earth”.

In seven weeks of fighting at Pozieres and Mouquet Farm, Australia’s three divisions suffered 23,000 casualties. Over a third of them were either killed or died of their wounds.  Sergeant Newland’s former battalion, the 22nd, lost 27 officers and 656 'other ranks'.  The 6th Australian Machine Gun Company was sent to Ypres in Belgium for much of September and October, but by October 25, they were back in the Somme.  On 18 October 1916, Alfred Newland had been promoted in the field to 2nd Lieutenant. By November, the company was in the front line near Buire – around 100kms due west of Peronne, the southernmost point of the Somme offensive.  By now, the Somme offensive had virtually ground to a halt along the entire front amidst the early onset of winter.

On 8 November 1916, 2nd Lieutenant Alfred Lindsay Newland was killed by shellfire along with another officer and three 'other ranks'. He is remembered at the AIF Burial Grounds just north of Flers in the Somme. Lieutenant Newland’s now widowed mother, Louise, received the King’s Message, the memorial scroll and plaque and Alfred’s service medals – the 1914-15 Star, the British War Medal and the Victory Medal in the early 1920s. His father, William Anthony Newland, had died in 1921.

A photograph of the grave of 2nd Lt. Alfred Lindsay Newland in the field can be viewed here.

Medals and Entitlements
There’s an intriguing postscript to Lieutenant Alfred Newland’s military record.  Dated 13 August 1918, almost two years after he was killed in action, an entry reads: "Brought to the notice of the Secretary of War, for valuable services rendered."

Three other Newland brothers enlisted during World War I – in fact, two had already served in South Africa during the Boer War: