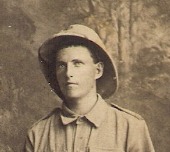 War Service
Many Laverton men enlisted in the A.I.F. in the early days of the war.  A newspaper report stated that when Laverton was compared to other towns of the same size, it had the largest percentage of volunteers.  As of 29 April 1915, fifteen local men from the Government's Explosive Reserve Guard had transferred to the A.I.F. at Broadmeadows. Private W. Cameron was one of those included in the article. Werribee Shire Banner, 29 April 1915, p.2.

At the age of 18 years and 8 months, and with the permission of both of his parents, William Duncan Cameron enlisted in the A.I.F. at Melbourne on 19 February 1915 and was sent to the military camp at Broadmeadows, for initial training.  This was completed on 1 May 1915, and he was appointed as a Private to "C" Company, 22nd Infantry Battalion, A.I.F.

Just over one week later, at the age of 18 years, Private William Cameron embarked from Melbourne on 10 May 1915 per HMAT Ulysses A38, with the 6th Infantry Brigade, 22nd Infantry Battalion, "C" Company.

After a period of additional training in Egypt, the 22nd Battalion were ordered to the Gallipoli Peninsula as reinforcements.  On 19 August 1915, they left the Heliopolis Oasis Camp near Cairo and proceeded to the port of Alexandria.

Following their arrival, the battalion embarked per S.S. Sicilian on 30 August 1915.  Three days later they disembarked on the island of Lemnos and marched into camp there.  Then on 4 September 1915 they embarked per H.M.T. Osmanieh and sailed for Anzac Cove.

A photograph of the HMT Osmanieh carrying Australian Troops to Gallipoli can be seen at http://ergo.slv.vic.gov.au/image/ship-osmanieh-carrying-australian-troops-gallipoli

The 22nd Battalion arrived off the Gallipoli Coast in the early hours on 5 September 1915 and disembarked in five large barges.  Once onshore they were then required to walk two miles to their dugouts.  The 23rd Battalion had already preceded them ashore, and the 24th Battalion followed them later in the day.  The 22nd Battalion first occupied the southern end of Number 2 Section, near Lone Pine.

On 9 September 1915, the unit war diary records that the 22nd were under heavy Turkish shelling in the Lone Pine trench. A photograph of the men of the 22nd Battalion, going into the line at the southern part of Lone Pine to relieve the 6th Battalion can be seen at https://www.awm.gov.au/collection/A00847/

The Officer Commanding the 22nd Battalion often acted as a censor of the soldier's letters home.  An entry in the unit’s war diary for 17 September describes his observations after he had spent time censoring letters.  Most of them were written to mothers, and the men spoke lovingly of their Australian homes.  In regards to rations, "bully beef and biscuits were said to be served to frequently, but there were no general complaints".

"At 1705 hours on 18 September 1915, the Turks commenced a demonstration along our whole front, and casualties were very slight.”
This is how the unit war diary describes the incident in which Private Cameron was wounded.  He was first admitted to the 1st ACCS (Casualty Clearing Station) with shrapnel wound to his face and head.  After treatment, he was admitted to the 6th Field Ambulance, and then transferred to the Hospital Ship Maheno.  This ship now sits as a rusted wreck on the beach at Fraser Island.

The Hospital Ship conveyed him to the Island of Malta, where he was admitted to the Cottonera Military Hospital, on 2 October 1915.  He remained there for just over two weeks before he embarked for England per Hospital Ship Brasile.

William Duncan Cameron was listed among the wounded from Victoria.
The Argus, 25 October 1915, p.3.

Back in England, Private Cameron was admitted to the 3rd Wandsworth London Hospital for more treatment to the gunshot wounds to his face.

After three weeks treatment, he was discharged from hospital on 17 November 1915, and reported to the No 5 Australian Intermediate [Convalescent] Depot at Bostal Heath.  Bostal Heath and Abbey Wood is an area on the eastern edge of the London Borough of Greenwich, between Plumstead to the west and Erith to the east.  Abbey Wood takes its name from the nearby Lesnes Abbey.  Australian soldiers deemed fit enough, would spend time there, before returning to active service. Letters home have either Abbey Wood or Bostal Heath as the address where the soldiers were stationed.

In January 1916, Private Cameron sent a letter of thanks to Miss Hocking in Bendigo, for a scarf that she sent to him in England, via the Red Cross.  He mentioned that he was returning home soon because he had lost sight in one eye at Anzac.
Bendigo Advertiser, 6 March 1916, p.5.
This plan did not eventuate, and he was to return to the Western Front.

On 9 June 1916, Private Cameron was discharged from hospital in England, and returned to the 22nd Battalion who were now stationed at the Boris Grenier Line.  After a period in the front line, the Battalion marched over several weeks to new billets at Albert.  On the way they marched through Blanche Maison, Breilly, Rainville, Puchvillers, Lealvillers, before arriving at Sausage Valley.

On 4 August, the 22nd Battalion went back into the front line as part of a planned advance.  During the second day, casualties were reported as being heavy due to enemy artillery fire, but the Battalion held its ground.  It was during this fighting that Private Cameron was wounded again.  The casualties in Battalion at Poziers, between 27 July and 8 August were:

Suffering with a gunshot wound to his shoulder, Private Cameron was admitted to the 8th General Hospital at Rouen on 8 August 1916.  On the following day he embarked from Havre per the Hospital Ship Mahino, and returned to England.

On arrival he was admitted to the Beaufort War Hospital at Fishponds in Bristol, where he was treated, before being discharged on 8 September 1916.

Private Cameron was then taken on strength with the No 2 Australian Command Depot at  Weymouth.  This base had been established to house men who were not expected to be fit for duty for six months.  He remained there for one month, and was then transferred to the 6th Training Battalion at Rollestone/Larkhill.

He remained with the 6th Training Battalion until 13 February 1917 when he was admitted to the Brigade Hospital at Perham Downs, as being sick.  No further details are given.

His treatment lasted for about four weeks, and he was discharged to A.M.C. Details in London on 16 May 1917. (A.M.C. - Army Medical Corps) At this time he was taken off strength with the 22nd Battalion.  While on strength with his new unit, he was then attached to the Group Clearing Hospital at Sutton Veny. This was a military hospital with over 1200 beds.

After three month at Sutton Veny, Private Cameron developed pleurisy (inflammation in the lungs) and was admitted to the Military Hospital at Tidworth for treatment.  His condition did not improve after one month, so he was transferred to the Brigade Hospital at Perham Downs for further treatment.

Once he had recovered he returned to the Group Clearing Hospital at Sutton Veny.  On 1 March 1918, a Medical Board classified him as "C1", which was "Fit for Home Service only". This meant that he would remain at Sutton Veny for the remainder of the War.

On the day after the Armistice, 11 November 1918, Private Cameron was sent to the No.1 Command Depot for Discipline Action.  Apparently he had gone absent without leave during the end of the war celebrations, and was being punished.

Because of his early enlistment date he was classified as "1915 Personnel", and was able to obtain an early passage home to Australia.  On 2 January 1919, he embarked from England per Berrima, and arrived in Melbourne on 17 February 1919.

Private W D Cameron was discharged from the 3rd Military District on 29 April 1919.

Post War
William Cameron was one of those who were welcomed home at a function held in the Werribee Mechanic’s Hall on 16 April 1919.  The Shire President extended a hearty welcome home and expressed sincere appreciation on behalf of all the shire residents to the twelve soldiers present.  Those who were presented with a suitably inscribed gold medal were:

William first appeared on the electoral rolls in 1919.  In that year he was living in Kelly Street Werribee, and was working as a labourer.  In the same year he married Yvonne Blanche Atchison and the couple moved to Diggers Road in Werribee South, and took up farming. They had three children:

William Cameron married for a second time in 1924. His wife was Catherine (Cathleen) Charlotte Watt, and they also lived on the farm at Werribee South and had several children.

The electoral rolls show that between 1934 and 1939 William and Catherine lived on their farm on Diggers Road, in Werribee South.  Along with their growing family, William's brother Archibald also lived with them, and he earned his living as a fisherman.

Then came the sudden death of Mr W.D. Cameron from Werribee South.  It was reported in the Werribee Shire Banner, 8 June 1939, p.2., and stated that "he was removing his boat from the mouth of the Werribee River, when he suffered a severe heart attack.  His daughter who was with him raised the alarm.  Mr Cameron had been suffering with a weak heart over a long period of time.  He had been a farmer in the Werribee South area for many years, where he was well and favourably known."
A bereavement notice was published in Werribee Shire Banner, 8 June 1939, p.2.

William Duncan was buried in the Werribee Cemetery in June 1939, aged 43 years.

In his later years Alexander  Cameron had became a grazier at Truganina in the Laverton district. Williamstown Chronicle, 24 January 1931, p.4.

His name appears on the Shire of Werribee Oak Board as "CAMERON.W.D."

Other Werribee men who served with the 22nd Battalion included:

Map of his Soldier Settlement Farm.