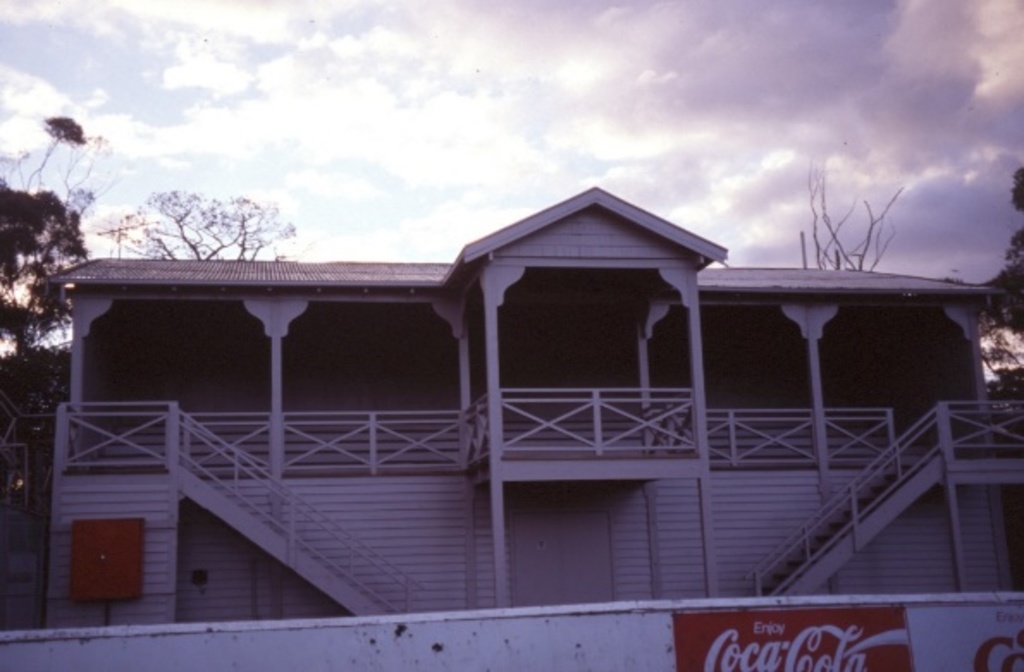 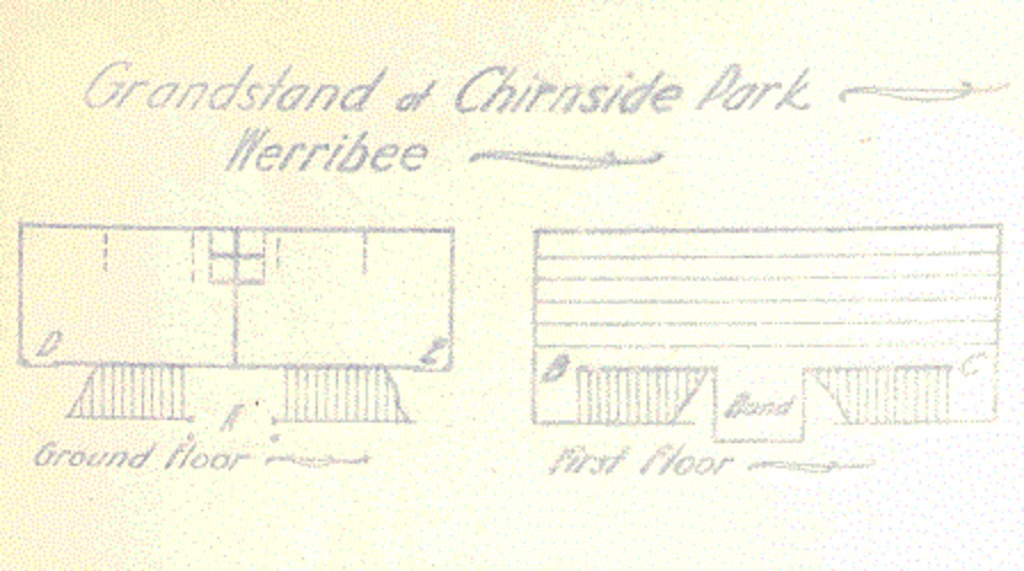 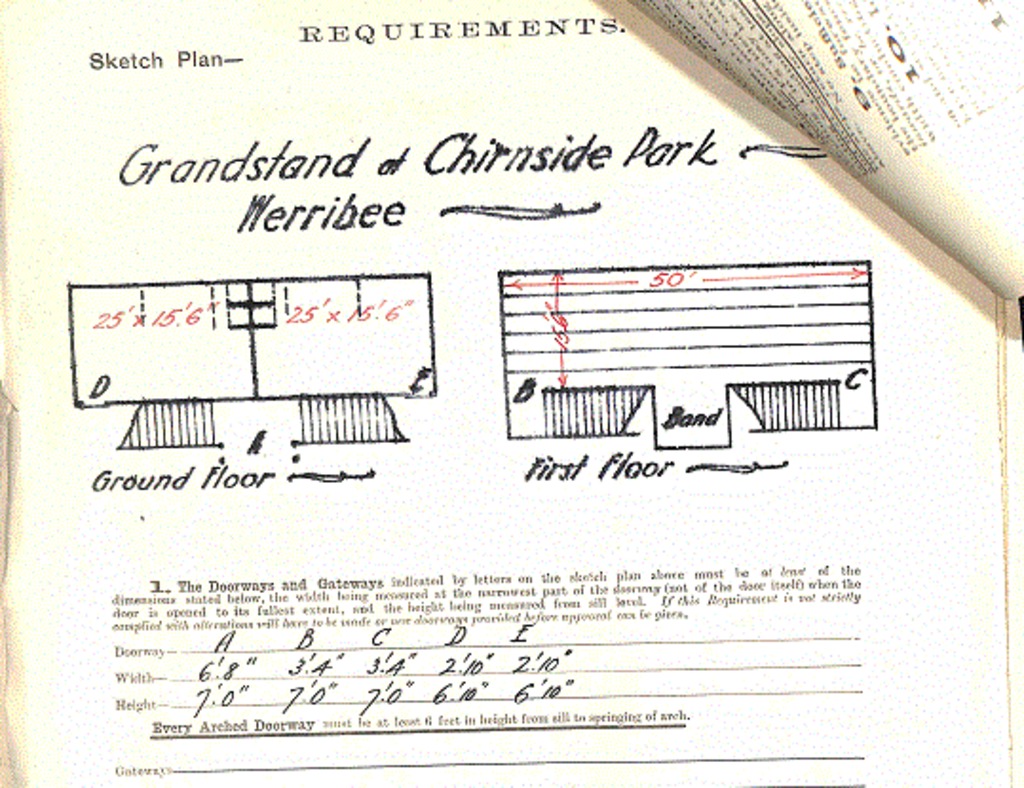 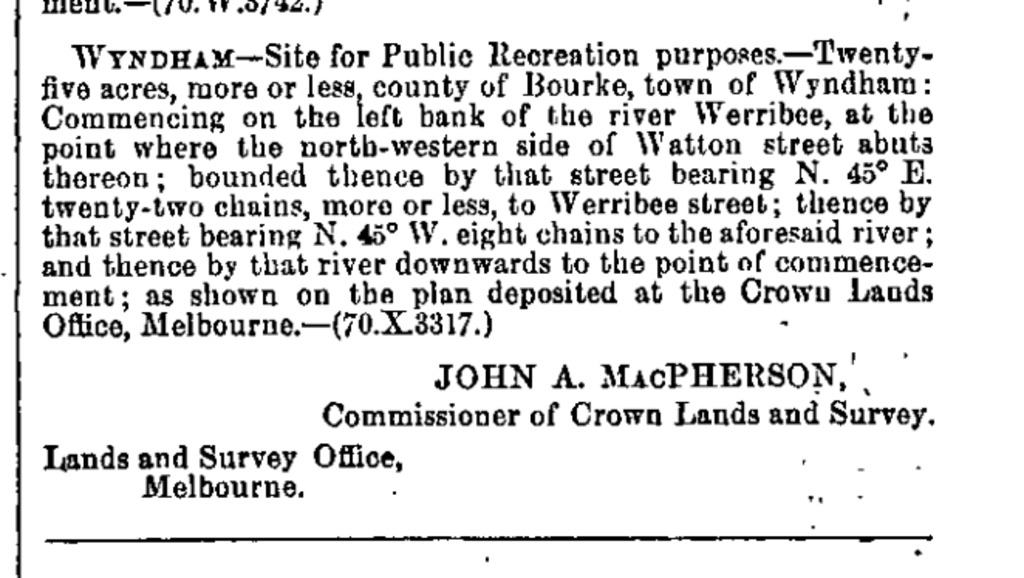 An article on the history and significance of the Grandstand at Chirnside Park written by Elizabeth (Libby) Bernard.

The grandstand at Chirnside Park was built at the end of 1923 with money raised by the Werribee Progress Association and given to the Shire of Werribee.

The timber framed grandstand is made of hard wood and designed by local builder Mr H. J. Angwin based on very simple plans provided by the Shire Engineer [picture 2] and modified and upgraded by the Public Health Department [picture 3].

Situated in the forward pocket of what is now known as Avalon Airport Oval, the grandstand cost £597/14/5 to build.  Werribee Shire Banner, 4 January 1924, p.4.  It has two entry stairs leading from the oval to the tiered seating for 50 spectators above.  It is modest in size compared to earlier Victorian grandstands such as those in Ballarat and Bendigo, but is reflective of the Shire of Werribee's population in the early 1920s which was approximately 7,500 people (Victorian Muncipal Directory and Gazetteer: Melbourne: 1927), this is in comparison to Ballarat's population of 37,550 and Bendigo's population of 26,000.

How is it significant?

This heritage assessment of the grandstand at Chirnside Park is based on the criteria and framework set out in the The Victorian Heritage Register Criteria and Threshold Guidelines.  Taking these into consideration the grandstand has been deemed historically significant under:

6.4 Providing places to meet, work and socialise in rural areas

Theme 9: Shaping cultural and creative life
How have people enjoyed their leisure and developed leisure facilities?

How does sport express local allegiances, social status or ethnicity?

What does the establishment / development of local sporting clubs tells us about the town / suburban community?

9.1 Participating in sport and recreation

Why is it significant?

The rejuvenation of Chirnside Park was high on the Werribee Progress Association's agenda in the early 1920s with the “movement … devoted to ..[its] beautification” .  Weekly Times, 13 August 1921, p.10 as part of its aim to "increase benefits for residents of the town and to … foster any movement that was for the welfare and progress of the district." Werribee Shire Banner, 23 June 1921, p.3.

The construction of a rotunda, band or grand stand was part of this plan and to help achieve this the Werribee Progress Association partnered with the Shire Council, Returned Soldiers Association, Agricultural Society, Brass Band and Citizen's Associations to hold a "Back to Werribee Carnival".  The Carnival ran for a week in March 1922 and was a huge success raising the funds to build the grandstand and also plant trees.  The grandstand is of social significance as a tangible reminder of the community spirit shown by this group of people in an effort to rejuvenate their community after World War 1.

Chirnside Park has also been the home of football and cricket matches, athletic competitions, industrial picnics and community events since it was gazetted in 1870 for public use [picture 4].  Victorian Government Gazette, 29 April 1870, p.664.

In a recent report commissioned by AFL Victoria to "determine the social value of a typical community football club" and how they contribute to the "well-being, trust and social connectedness" of a community it was determined that "for every 1 player, football clubs reach 10 people in their community generating increased civic pride".  Centre for Sport and Social Impact: Victoria, 2017). *

The grandstand has local social significance as a tangible reminder of 93 years of sporting spectatorship and in turn, civic pride and social connectedness.

The grandstand was recently dismantled and put into storage while the facilities at Avalon Airport Oval, Chirnside Park are redeveloped.  While there was mention that the grandstand would be relocated to the other side of the oval this has not been confirmed.