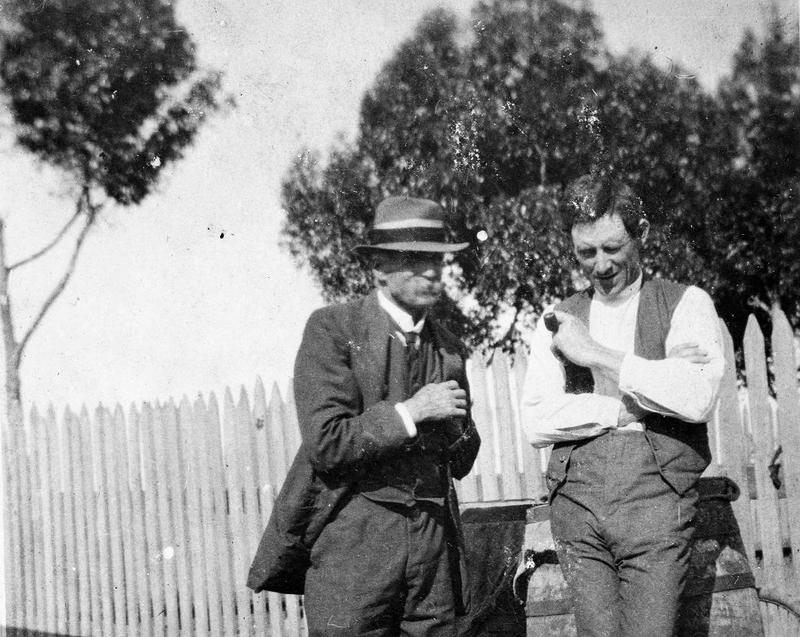 Joseph John O'Connor (1866-1950), also known as J.J, or Joe, was born on a small farm in Dooncaha, near Tarbert in Co.Kerry, Ireland on the 5th April to John O'Connor and Nora Scanlon. He emigrated to Melbourne in the late 1880's and went to the Mt. Blackwood area, as he already had family there from Ireland. Joe worked on the O'Connor farm in Mt Blackwood, and on various Council projects with his Uncles Michael and Maurice and his cousins Joseph & Michael. In 1895, the O'Connor's leased their properties in Mt Blackwood & Myrniong, and relocated to what is now known as Werribee South. Joe's uncle, Michael O'Connor had already leased some land from the Chirnsides in the Werribee South area a few years prior, to which he later bought, and also bought 75 acres from the Metropolitan Board of Works in 1901. Their farm was located on the land between, what later became known as O'Connor's Road, and Duncan's Road (the land on the other-side of Duncan's Rd, down to the Pt Cook RAAF base, was occupied by Ned Cunningham and his wife Nora (daughter of Michael O'Connor, and cousin to Joseph)). After marrying Ellen Crowe ( a farmers daughter from Pentland Hills/Myrniong area) in 1897, Joe farmed in Carrum where he perhaps first got a taste for politics and Council. After moving around between Carrum, Werribee, Lara/Little River as a farmer for nearly 30 yrs, Joe moved back to Werribee in about 1925. Joe got involved in Werribee Politics, and involved himself in the evolvement of the Werribee District and later served the people of Werribee as a Councillor for 7 years. On 22nd August 1935 he was voted onto Council for the first time by the ratepayers of Werribee. 1941–1942, he was appointed to the position of President to the Shire of Werribee Council. Each time thanking the people of Werribee publicly in the Werribee Shire Banner. On 23rd February 1942 at the Werribee Magistrates Court, Joe was sworn in as an Honorary Justice, and sat on The Bench at the Werribee Courthouse. On 13th August 1945 he announced his retirement from Werribee Council, as usual via the local newspaper. He died at his residence ''Rivergrove'' near the Ballan Rd on 29th December 1950. He is buried at Werribee Cemetery along with his wife Ellen (d: 1944) and his younger brother Matthew (d; 1926). Joe had no children. His cousin Joseph O'Connor, aforementioned, was a Founding Director of the Werribee Settlers Dairying Co-Op in 1918, and remained so until his death in 1951. The Werribee Dairying Co-Op wound up in June 1991. Joe's brother Maurice, became a highly decorated and well known Officer in the U.S Army and fought in 3 wars. And his sister Bridget, who emigrated to Australia with their brother Matthew, is mentioned in the State Library of Western Australia – Pioneering Women's Fund, she pioneered ''Jilbadji Station'', now a Large National Park. She died in 1971 aged 95 and is buried in the Pioneers Cemetery in Southern Cross, Western Australia under her married name of Bennett. The farm in Ireland where Joseph, his siblings and the O'Connor's who came out to Australia before him were born, is still in O'Connor hands to this day, after some 200 years.