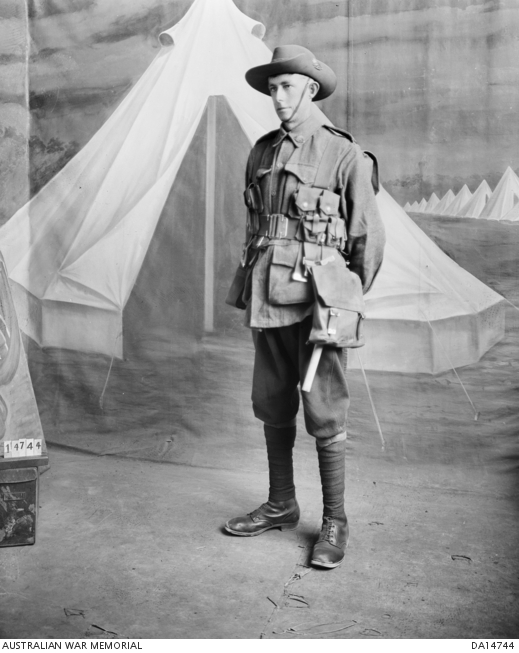 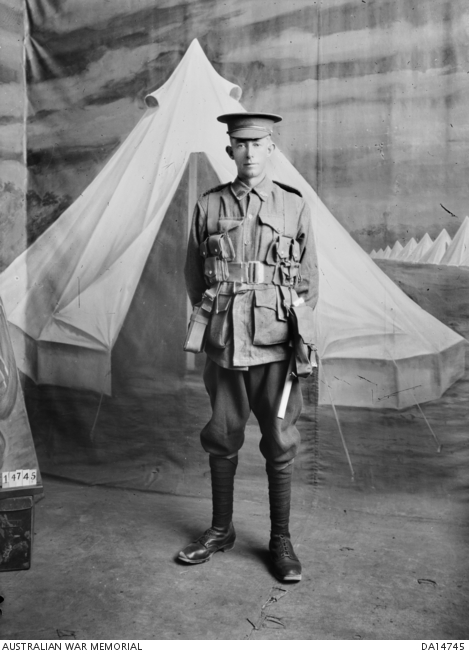 No.5201  Private Herbert Samuel Porter
Herbert Samuel was born to John Jesse and Mary Jane (nee Byne).
They had the following children:
His mother Mary Jane died in South Yarra Melbourne, in 1908. There is no further information about them before Herbert joined the Army.

War Service
Herbert enlisted in the Army at Melbourne, Victoria on 25 January 1916.  He was aged 26 years and 4 months and he was 5 feet and 10 inches tall.  Herbert weighed 135 pounds with a chest measurment of 32 to 34 inches.  His complexion was listed as fresh, with blue eyes and light brown hair. All of this was recorded at the time of his enlistment.

Herbert began his training at 14th Depot Battalion at Ballarat from 2 February 1916 to 23 March 1916. He then continued his training at Broadmeadows Camp, which was completed on 30 March 1916 and he was appointed to 8th Batallion/16th Reinforcements.

Herbert was admitted to hospital Etaples in Cairo General Hospital on 29 June 1916.   He was Taken on Strength with the 8th battalion AIF from 16th reinforcements on front line 1st August 1916.

The Australian Red Cross Society Wounded and Missing Enquiry Bureau files, 1914-18 War records the following:
"8th Battalion A.I.F.  Porter H.S. 5201
Wounded September 1916
I knew him personally. He enlisted in Ballarat was 16th Reinf. A.Coy. He joined the Battalion in France. He was buried by a shell in Aug. and was dug out, he was just a little shaky. He was a very nervous chap. He was with the Batttalion in September and right up to when I left on Dec 8th. He was not wounded.
Reference:-
J.Haley 5101 8th Batt.A.I.F."

On 21 February 1917, Herbert was wounded in action in France.
He was transferred to Australian Veteran Hospital Calais depot at Le Havre for the second time on 8 May 1917.
He was taken on Strength on 31 July 1917 by Veteran Hospital 8th Battalion ex 1st Australian Divisional base Depot, France.
31 July 1917 saw him transferred Australian Vet Hospital, Calais.  He was posted to Vety Evacuation Station from Vety Hospital on 1 November 1918.
He was admitted to 1st A.G.M. hospital with the Measles on 25 March 1919.

He was discharged from hospital from Rothelm 5 April 1919.

Herbert returned to Australia per Runic on 27 April 1919 and discharged from 1st Veteran section on 25 April 1919.

Herbert married Effie Fleming in 1922.  According to Electoral Rolls in 1924, Effie and Herbert were living in Speight Street, Northcote and Herbert is an engine-driver.

According to Wills and Probate Records, Victoria Australia, Effie died on 23 May 1969 in Rosebud.

Herbert died on 13 June 1969 in Rosebud, according to Victoria, Australia, Wills and Probate Records.

A photograph of Samuel Herbert on the Australian War Memorial website has the following description: "Studio portrait of 5201 Private (Pte) Herbert Samuel Porter, 8th Battalion. A farmer from Couangalt, Victoria prior to enlistment, Pte Porter embarked with the 16th reinforcements from Melbourne on HMAT Suffolk on 1 April 1916. Later wounded in action he was evacuated to a rest camp. Following his recovery he transferred to the Australian Veterinary Hospital and returned to Australia on 27 April 1919. This is one of a series of photographs taken by the Darge Photographic Company which had a concession to take photographs at the Broadmeadows and Seymour army camps during the First World War. In the 1930s, the Australian War Memorial purchased the original glass negatives from Algernon Darge, along with the photographers' notebooks. The notebooks contain brief details, usually a surname or unit name, for each negative. See also DA14744."