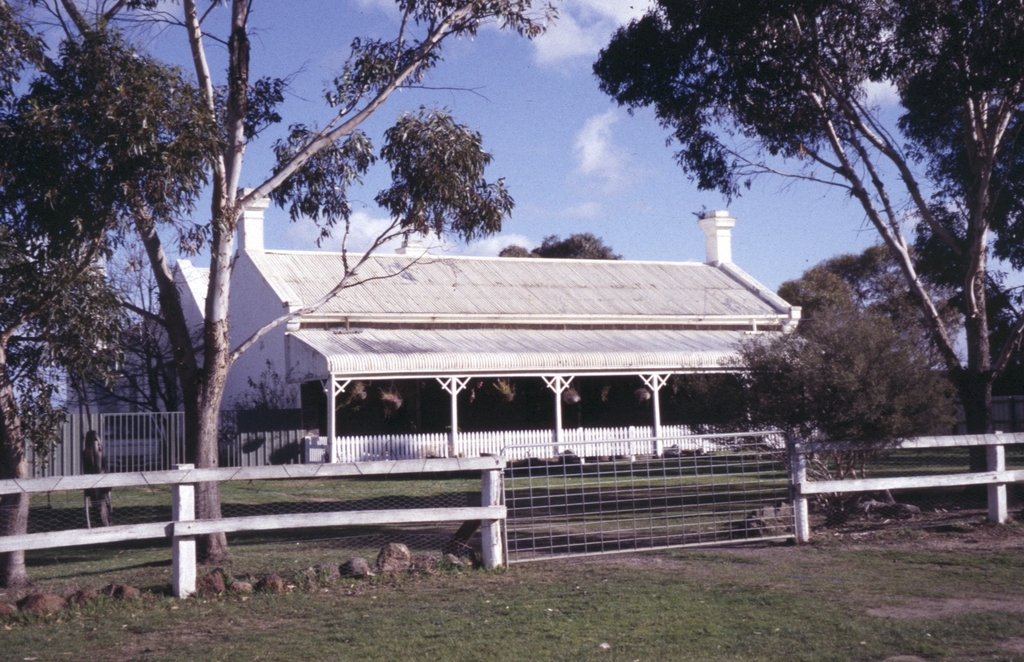 Single storey bluestone hotel that closed in 1973 and is now a private residence.

The site of this building, now a private residence, has been associated from the 1850s with a number of hotel structures. An early hotel, known as the Bowling Green Hotel, was reputedly built there after the Little River railway opened. It was burned down in 1858. Henry Nickless was the registered owner of the site, Allotment 18, as well as the adjacent Allotments 16 and 17.

An early 1860s "Geological Survey of Victoria" map of part of the Parish of Bulban indicates the "Little River Hotel" on the site in Allotment 18 on the south side of Flinders Street near River Street. This hotel was most probably a very modest structure and in the earlies district rate records was listed as a hotel and store with a valuation of only 30 pounds. It seems that this hotel (the second on the site?) was replaced in the early 1870s by a more substantial building.

There were more changes by the mid-1870s when the hotel was rated by Hugh Lear, hotelkeeper. He also owned a hall and a dwelling occupied by George Trim, labourer, which may have been the 1860s hotel. The combined valuation was 100 pounds.

During the early 1880s, Robert Stroud, warehouseman, became the owner of the hotel and hall. By the late 1880s the property was recorded as the Little River Hotel and stables owned by Stroud and occupied by Charles Nicholls, hotelkeeper.

In the 1890s, first W. Cornwall and then Duncan McIntosh, member of a well known district family, were owners of the Little River Hotel in Allotment 18. James Toohey was the licensee during the McIntosh ownership. An article in the district press of June 1894 told of McIntosh' purchase of the hotel for 1250 pounds. The "Assembly Hall, the Little River store (at present occupied by Mr. J Berry) and about 30 acres of good arable land" were included in the purchase. The article reported that McIntosh was "effecting extensive improvements on the premises in the shape of repairs to the Assembly Hall, new brick stabling, and other out-buildings". McIntosh was intending to "continue his improvements until he has made the conveniences both inside and outside equal to those of any other first-class country hostelry in the colony".

However, by the turn of the century, it was reported that McIntosh' Assembly Hall, which had been used as Little River's main public meeting place, had been condemned and the construction of a Mechanics Institute has become a necessity. In February 1910, it was announced that Duncan McIntosh had given the land for the Little River Mechanics Hall. This new building was officially opened in August 1910. Only a month later, McIntosh's death was reported.

The old hotel closed in 1973 and is now a private residence.