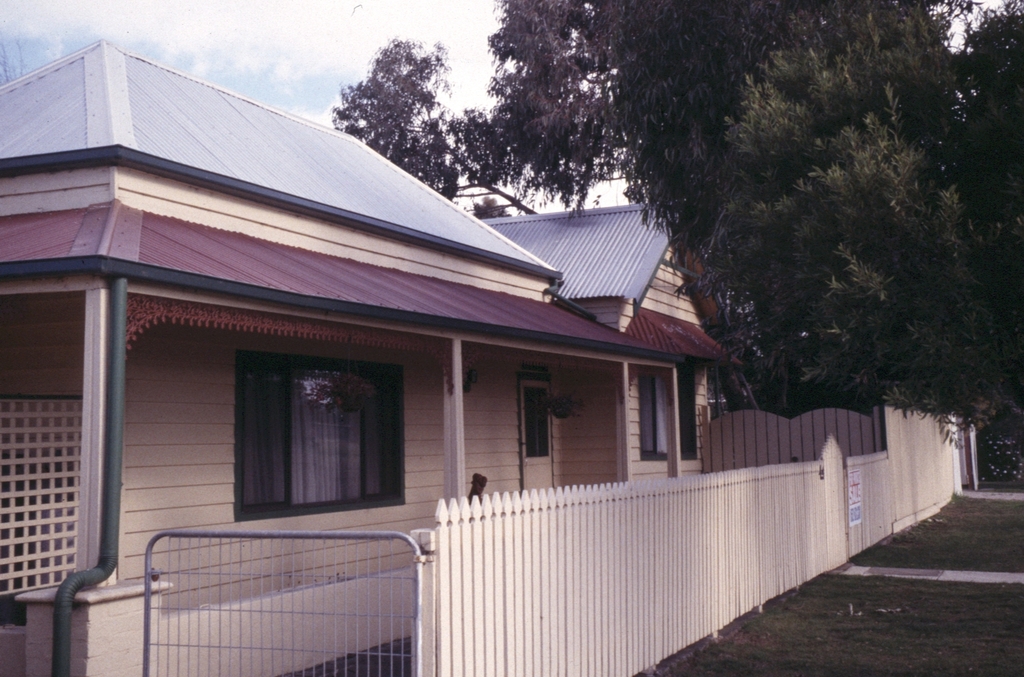 Timber house and timber shed once used as a blacksmiths but now a private residence.

Timber house and timber shed once used as a blacksmiths but now a private residence.

Timber house and timber shed. The house appears to have been built in two or three stages. There are two hipped roof sections, the rear being the lower, plus a c1920s addition on the west side. This addition has an unusual vernacular window hood.

There are later additions at the rear. The verandah may date from the 1920s additions, or be more recent. According to Frank Shaw, the shop section - once located on the front of the building - has been removed. The shed is a simple timber structure with large sliding timber door to River Street.

This building, now a weatherboard residence but still with a billiard room, is important as a rare survivor of a number of small shops with associated dwellings that once formed a part of the Little River township clustered about River and Rothwell Streets last century. The Little River Township, located south of the railway was gazetted in 1861.

The first owner of the River Street building in the 1880s was William Henry Pellow, a local blacksmith. This was an important trade in a farming district. Shire of Werribee rate records confirm that Pellow's smithy was on 1/4 acre was rated first in 1884-1885. A dwelling was listed in 1886-1887 when the valuation of the property more than doubled from 7 poundsto 15 pounds. By 1887-1888, Pellow's house and smithy was described as on 81/2 acres.

From the late 1880s, Pellow's workshop and dwelling on 81/2 acres increased in value to 18, 19 pounds and in 1894-95 to 21 pounds. In 1898-99 it was identified as on Lots 35 and 36, Parish of Bulban. Local historian Frank Shaw tells how there was a shop frontage from which Pellow "sold a few odds and ends including newspapers, soft drinks and lollies, etc."

"After the death of Pellow in 1923, Mick Danaher bought the property, moving in with his wife and six children". South Riding rate records confirm this change in ownership. By 1924 Danaher was rated for a shop and dwelling in Lot 36 of Section 1 with a valuation of 25 pounds".

According to Shaw, Danaher was responsible for the construction of a new billiard room on the east side of the building. This room became a popular community meeting place,especially on Friday and Saturday nights. In 1947 the Danahers moved to the present Werribee township south of the Werribee River. From that date the shop and billiard room ceased operation. It was closed and demolished at this time.