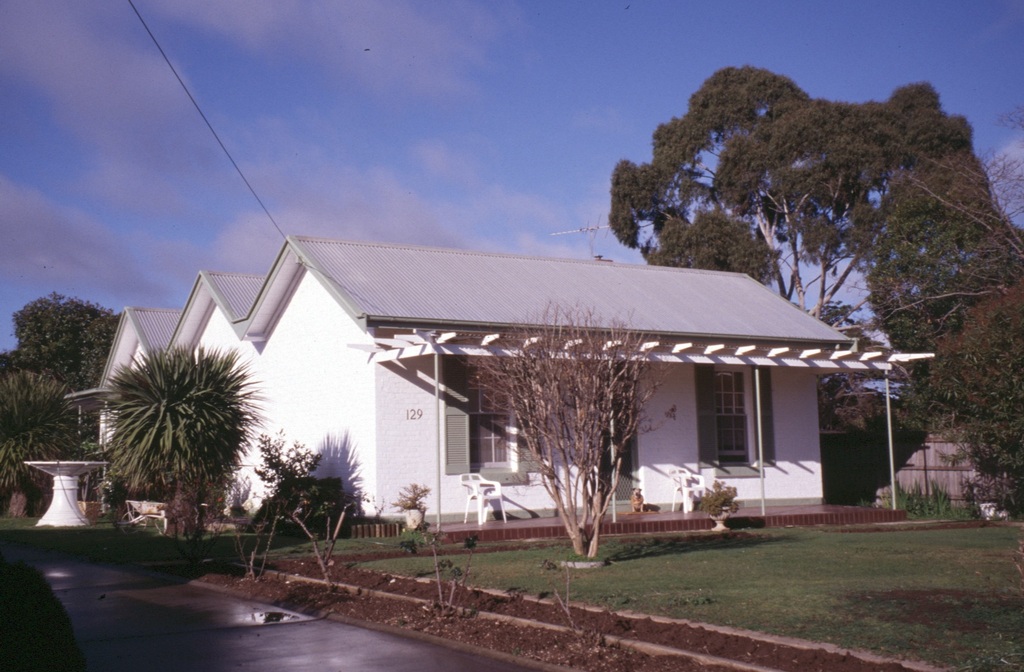 A simple cottage comprising three gabled sections , the front two sections in brick and the rear section in timber. The main facade is symmetrical in form, with a central entry and a single double-hung sash window on either side. Each sash has six-panes, suggesting and early date for the house can be confirmed through present research. The house appears to have stone window sills and perhaps stone foundations.

The house has been altered. The face brickwork has been painted, and the verandah removed and replaced with a pergola.

A Police Station with several smaller outbuildings on its west side and a pair of small buildings at the rear of the station fence are indicated in Allotment 3 in Synnot Street on the 1910 "Plan of Subdivision of the Police Paddock in the Township of Werribee". This is the site of the present triple-gabled cottage.

The Police Paddock is shown on an early 1857 map of the Township of Wyndham (the early name for Werribee). This 69 acre paddock was bounded on the north side by Synnot Street and on the east by Greaves Street. On its west were the banks of the Werribee River. A police station was indicated on the Synnot and Greaves Street corner of the Police Paddock in an 1862 Geological Survey of Victoria map. A Police Office was recorded at Wyndham in the 1865 Baillieres "Victorian Gazetteer".

The exact date on construction of the present buildins on Allotment 3 in unknown. An inspection in April 1906 reported that "The Paddock is occupied by the police and the Barracks and police buildings are built on it". "Barracks" provided living quarters for colonial policemen. However, they were often very humble buildings. The ones for the Melbourne police district prior to 1859, when new barracks were built were "small and inconvenient wooden houses...".

The constable in charge at Werribee in 1906 complained that the location of the police building in Synnot Street was "too far away from the Centre of the Township" and said that a nearer site had been offered to the police.

The Police Reserve was revoked in April 1909. This was followed in 1910 by the subdivision of the Police Paddock for closer settlement. The outline of a police station with a number of outbuildings was shown on the 1910 plan.