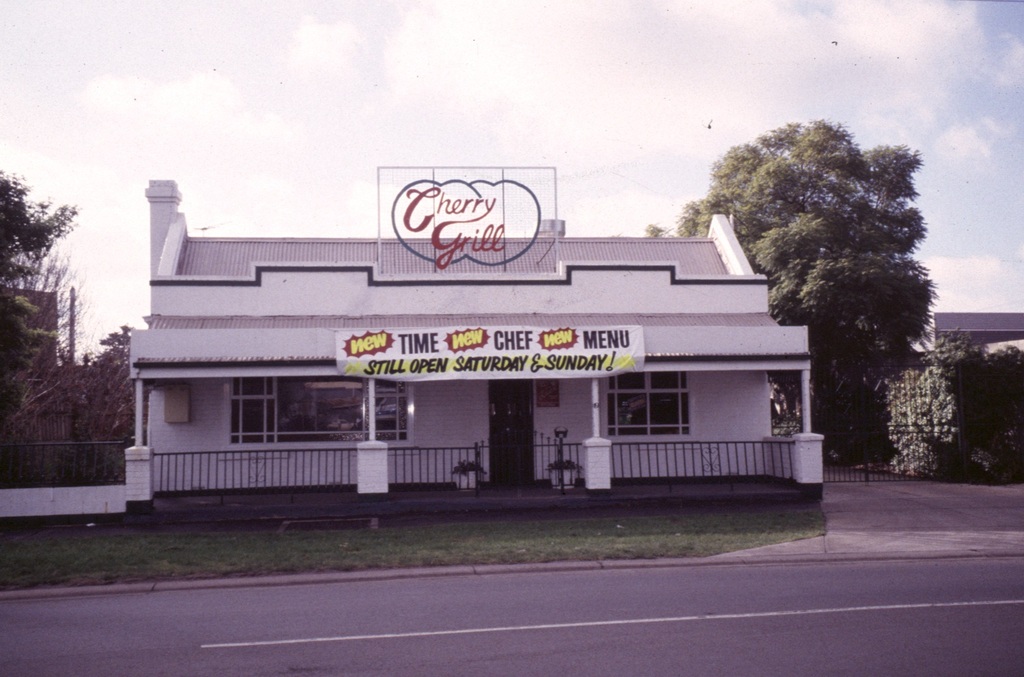 A simple double fronted brick building built to the property boundary. Generally symmetrical in form with a gabled roof with a parapet parallel to the street frontage.

Cherry Grill, formerly a house and butchers shop, is a simple double-fronted brick building built to the property boundary along Cherry Street.  The building is generally symmetrical in form, but the front entry is off-centre (this appears to be its original position).  The building has a gabled roof with a parapet parallel to the street frontage.  In appearance it is suggestive of an early hotel or an inner Melbourne building.  Within the context of Werribee, this building is of an unusual type.

The building has experienced many changes over the years.  The verandah has been altered, and large windows have replaced two smaller windows each side of the main entry.  The parapet detailing is assumed to have been simplified and the rendered façade and face brick side walls have been painted.

Patrick Kelly, farmer, and at one time Shire President, was the first owner of the Victorian dwelling on this site which may date from the 1880s or earlier.  In 1882 Kelly was rated for a selection of 18 acres and paddocks on a further 28 acres of land.  By 1884-85, he was rated as the owner of a dwelling on 32 acres.  Kelly’s dwelling was identified in 1891-92 as on 7 ½ acres in Crown Allotments 54 and 55 in the Parish of Deutgam.  The present house is located on Crown Allotment 55.

Kelly was a prominent local resident.  He was a Cemetery Trustee in 1865 and founded the Wyndham Ratepayers Association in 1870.  Kelly was involved in planting the Recreation Reserve (now Chirnside Park) and in 1881 was among those working for the establishment of a Werribee Mechanics Institute and Public Library.

Following the subdivision of Allotments 54 and 55 by the Chirnside Estate on 31 October 1911, the former Kelly dwelling was identified as Lot 6 in Cherry Street.  McKinnon became the owner and occupier of the property, described in the 1911-12 rate records as a dwelling on 1 rood of land, Lot 6, with a valuation of £15.  McKinnon was the owner still in the mid 1930s.

Kelly’s former home became known as The Cherry Grill.  The building was destroyed by fire and later completely demolished.