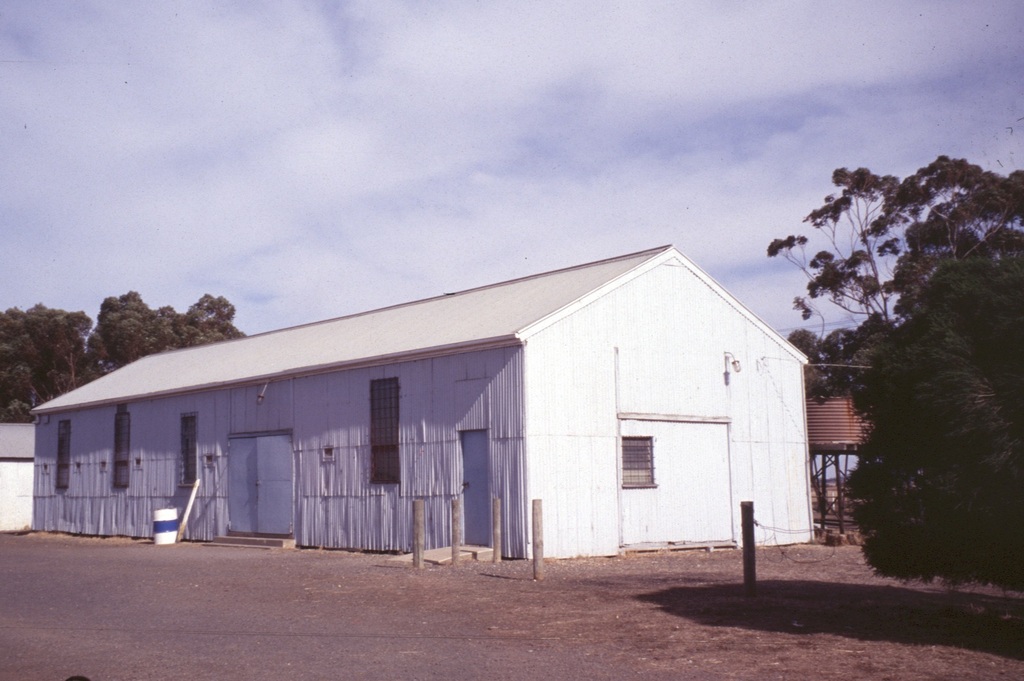 Township located on the crossroads of Dohertys and Woods Roads.

The site of Truganina township is located on the crossroads of Dohertys and Woods Road.  Once the centre of this community, most of it physical features have disappeared, largely through the impact of the 1969 fires.

Today the township comprises: the site on the crossroads, the cemetery on Woods Road, the ARP hall on the Recreation Ground and a few plantings.

The hall is an ARP (Air Raid Precaution) Hall given by Council to the Truganina community.  The hall is rectangular in plan, and located on the Woods Road boundary of the Recreation Ground.  The exterior is clad in corrugated iron, and the interior is timber lined, with a fibro-cement ceiling.

The cemetery is sited as the centre of what was once the Truganina township.  Today it is sited within an open grazing landscape typical of the area.  The stone wall that once enclosed the cemetery was removed some years ago.  The stones were reputedly used to build a dam in 1953 on the property of the Silk family on Davis Road Tarneit.  Truganina Cemetery was assessed in Andrew Ward’s 1990 study ‘Werribee growth area heritage report’.  Ward included a list of the “pre-1945 earliest male persons for each headstone” (although the list includes some women), but does not describe the monuments in detail.  The cemetery is fenced with a simple iron gate onto Woods Road.  Headstones of various ages are visible along the front and on each side.  The centre of the cemetery has a row of sugar gums, with the grass left unmown (marking the area containing native plants of botanical significance).

There are a few signs remaining of the other structures that were once part of this complex – the Mechanics Institute, school and Presbyterian Church.  The site of the church (located on the north east corner of the intersection) has a stone wall marking the perimeter on two sides, and a large oak tree remaining from earlier plantings.

During the 1860s, following the development of local government in the Werribee District, a number of community services, such as schools, churches, hospitals and public cemeteries, were established.  Land for a public cemetery was set aside in the Wyndham (later Werribee) township in October 1864.  Trustees were appointed in February 1865.

In the same year, a second district public cemetery was opened in Truganina.  The Truganina Cemetery Reserve (Crown Allotment 6B, Section XV, Parish of Truganina) was gazetted in 1865.  The Reserve is located on the west side of Woods Road, on the north-west corner of a 128 acre property owned in 1858 by pioneer district settler William Doherty.  Doherty was one of the first members of the Wyndham District Road Board in 1863.

Prior to the opening of the cemetery, Truganina residents were buried on enclosures within district farming properties.  Samuel and Henry Cropley are said to have been buried on their May Farm property.  According to a 1930s history of Truganina State School, the first burial in the Woods Road cemetery took place on 4 October 1865, ‘before the site had been proclaimed’.  The original cemetery trustees were district farmers, William Leake, John Robinson, John Stewart and Robert Faragher and Shire Engineer, Thomas Haymes.

Geo. F. Green in his 1935 publication ‘A brief history of Truganina from the coming of the white man to 1935’ also claims that “Not a few former residents have expressed the desire to be interred at Truganina, while in recent times (i.e. the 1930s) ashes have been brought from as far away as Sydney to find their last resting place in that quiet little cemetery”.