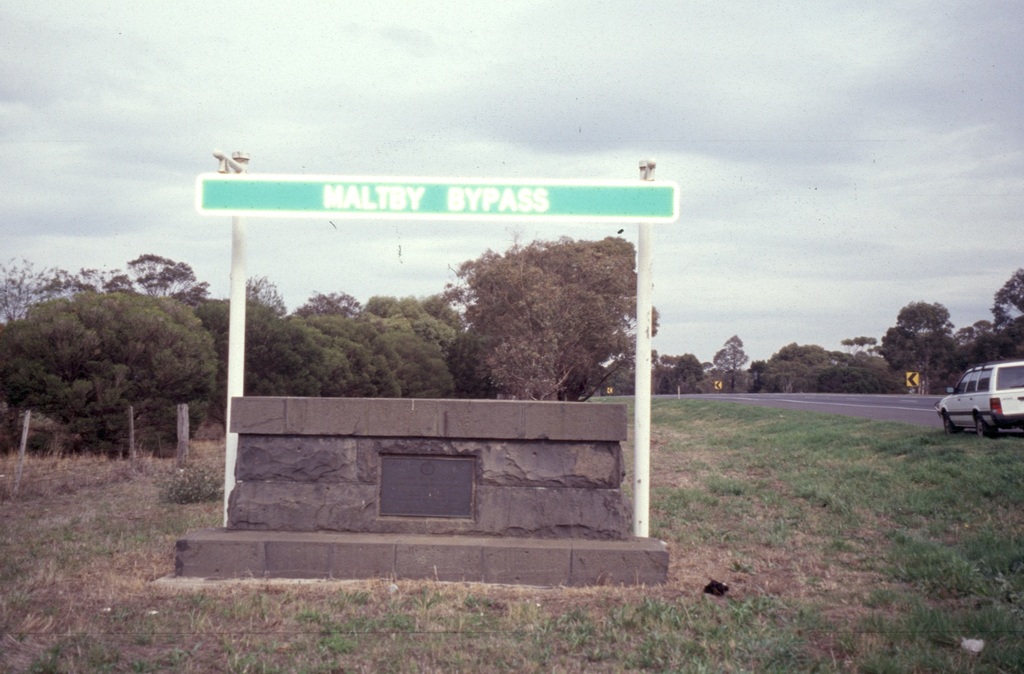 Maltby By-Pass is a section of road that bypasses the original alignment of the Princes Highway through Werribee township.  The road is a divided carriageway and Australian native plantings along the median and the verges.  At the western end, a group of exotic plantings may reflect an earlier land use or be part of the planting scheme for this roadway.

At the eastern end is a small monument marking the opening of the Maltby By-Pass.  It is simple bluestone structure, surmounted by a frame on which a more recent sign has been mounted.

The development of the Maltby By-Pass heralded a new era in road design for Victoria.  Described in a special commemorative publication as introducing “a new concept into roading in Victoria … the particular feature of a by-pass road is that no access is permitted from side roads or from property fronting onto the by-pass road.  Townships are by-passed thus preventing through traffic from cluttering up the main streets.”

The design of the by-pass provided for two carriageways each of two lanes, with the potential for an additional lane in each direction incorporated into the design.  The wide central median was designed to be grassed and planted so as to provide a screen against traffic glare.  Traffic interchanges, grade separations, overpass bridges (Sneydes Road, Duncans Road and Farm Road) and new bridges (across the Werribee River) were built.  The total cost was £944,500.

The Maltby By-Pass was named after Hon. Sir Thomas K. Maltby, Commissioner for Public Works and a Member of the Legislative Assembly.  The by-pass was opened [on 16 June 1961?] by the Premier, Henry Bolte and the RAAF band from Laverton played the national anthem.