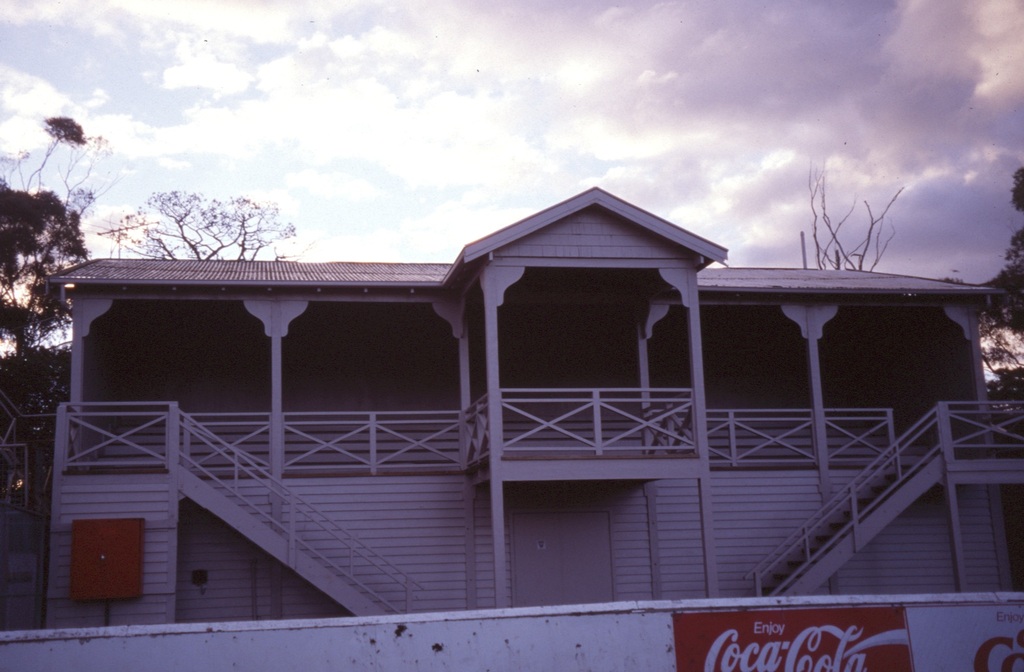 A large park located on a bend in the Werribee River.

The oval is the central feature: the appearance of the timber grandstand suggests it was built in the early 20th century, perhaps in the late 1910s or 1920s.  It is an elegant timber building, and contributes to the character of Chirnside Park.  The nearby kiosk appears to be of a similar age.  The adjoining clubrooms are new.

The entry gates and Hume and Hovell cairn on the corner of Watton and Werribee Streets are an important feature in the town.  There is also a memorial to the 1852 flood.

At the western end of the Park is a natural amphitheatre cut by the river, and nearby are the remains of an earlier concrete swimming pool (Bungey’s hole).  There is a concrete platform and pool, plus two weir walls which hold the water.  Nearby, within the same bend of the river, is a natural amphitheatre often used for performances.  The Anglers Club, a long established use, occupies a building at the end of the Park.

There is also a variety of more recent sporting facilities in the park today, including the Werribee Bowls Club.

The history of this park is associated with the early history of the Wyndham township after the establishment of the Shire in march 1864.  Chirnside Park was gazetted in 1870 as a township recreation reserve of 25 acres bounded by Watton Street and the Werribee River.  It was known last century as Werribee Park, a name that caused some confusion after the Chirnsides’ built their grand mansion in 1875.

Early township maps show the site of the park as vacant land in the 1860s, close to a cluster of early public buildings in the block bounded by Watton, Greaves and Synnot Streets.  Nearby there was an early bridge across the Werribee River; the Shire Pound (the site of the former Werribee District Hospital); an early Anglican building, St Thomas’ on the corner of Synnot and Greaves Streets; and the police station in Synnot Street within the extensive Police Paddock.

The recreation reserve was planned at first as a “miniature botanic gardens” in which sporting activities were forbidden.  In August 1878 the Shire commissioned Councillors Andrew Chirnside and Patrick Kelly, under the direction of William Robert Guilfoyle of the Melbourne Botanic Gardens, to spend £75 in the following twelve months on the laying out and planning of the reserve.  It is not known if a plan of the original layout of the reserve has survived.

The name Chirnside Park was given to the township’s principal recreation reserve at the turn of the century.  This was in recognition of the major contributions made by the Chirnside family to the development of Captain Percy Chirnside, but that the original plan was to name it after Elliot Armstrong.

Despite its early history, this century Chirnside Park has become an important sporting venue.  From the turn of the century, it was associated with swimming in that part of the Werribee River that bound it on the north and west.  Bungey’s Hole, later known as Bungey’s Pool, became  a popular swimming place after the Werribee Swimming Club took charge of it in 1908.  This recreational usage continued although there was some concern that the water in the pool was also used as a source of domestic supply.  In the 1920s it was decided that, instead of constructing new swimming baths, the swimming facilities in the river should be improved.  A meeting in September 1925 requested Council to provide dressing sheds at Bungey’s Pool.  Much later, in the mid-1950s there was agitation for an Olympic Pool which “resulted in the opening in the early 1960s of the splendid pool in Chirnside Park”.  However, remains of the first swimming pool are still observable at Chirnside Park.

In 2013 the oval is known as Avalon Airport Oval at Chirnside Park.