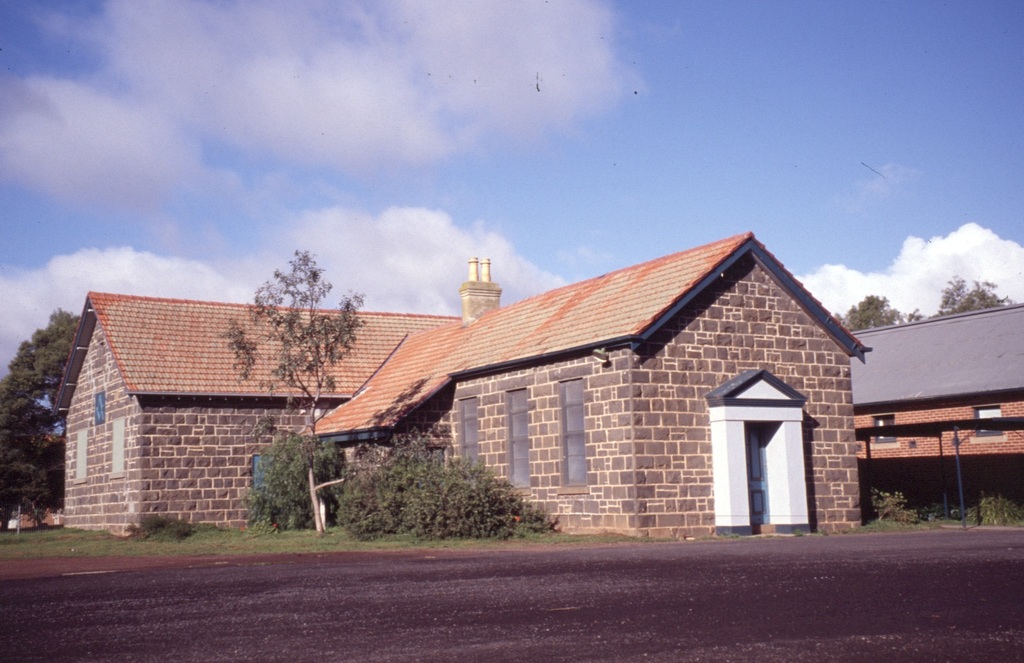 Two main buildings with infill between.

The Werribee Masonic Centre complex comprises two main buildings with infill between.  The main building, constructed of coursed bluestone with a terracotta tiled roof (a replacement), appears to have been built or added to in a number of stages.  The main building comprises two main wings, set at right angles.  Parts of the rear of the southern section are rendered and ruled ashlar, whereas the balance of the building is face bluestone.  A plaque on the south-eastern wall records the opening of the Masonic Temple by Pro Grand Master M.W. Bro. F. T. Hickford, M.A., L.L.B.  on 1 October 1925.

The other main building is another hall, built in brick with a corrugated iron roof.  It is a simple building, matching the overall form of the earlier hall.  It has a simple entry with brick pilasters on either side, high windows with rendered sills on the sides, and exposed rafters under the eaves.  The two buildings are linked by later infill.

The site retains sections of a bluestone wall along Greaves and Watton Streets, and a number of older peppercorn trees.

The earliest history of this building is associated with the beginning of local government in the Werribee district in the 1860s.  The Wyndham Road District was proclaimed on 14 October 1862 by the Governor of Victoria, Sir Henry Barkly.  The district ran from Williamstown to Little River and over to near Bacchus Marsh and covered 287 square miles.  A Road District Board was established on 29 December 1862 in Elliot Armstrong’s hotel, the Bridge Inn.  Armstrong became the Board’s first secretary while Robert Chirnside was the first Chairman.

Two years later in March 1864, the Shire of Wyndham was anxious to secure suitable premises for its meetings.  On 21 September 1864 the Council applied to the colonial Government for a grant of land near the Police Reserve “for the erection of offices and other public purposes”.  Later, on 16 November 1864, the Council Secretary was instructed to call for competitive plans and specifications for a Shire Hall.  The building was to be of stone or brick and consist of one large room and two offices.  The estimated cost was from £300 to £400.

There were many delays.  In October 1865 the Council considered two plans submitted for a Shire Hall, one from the Melbourne architect Peter Matthews, and the other from John Barter, the Shire Engineer.  Matthews’ plan was accepted.  However in June 1866, the Shire Engineer reported that the plan was “utterly unworkable”.  He then prepared another plan and specifications and called tenders.  Robert Roberts’ tender of £592, 2 shillings and 9 pence was accepted, and he was granted permission to quarry stone in the Shire and obtain sand off railway land.  John Barter was paid £10 for his design.

The Crown Grant for the Shire Hall Reserve, an acre of land in Allotment 1, Parish of Deutgam, on the southwest corner of Watton Street and Greaves Street was issued in October 1867.