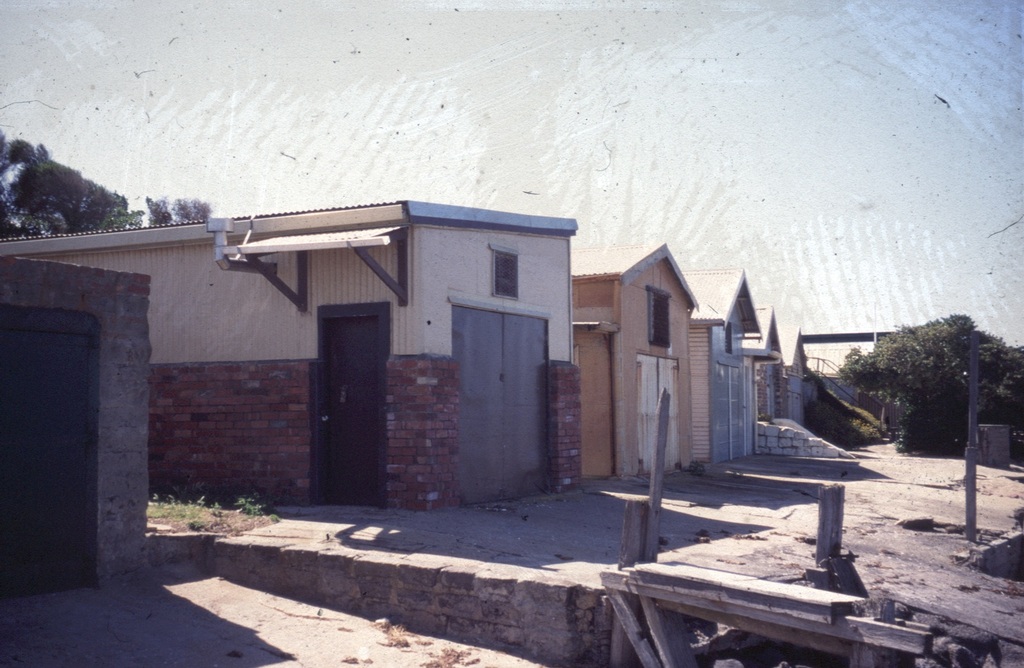 At Campbell’s Cove, there is a row of approximately 150 small houses lining the waterfront, running east from the intersection between Cunningham’s Road and the track which runs along the beach.  Most have timber/fibro walls, with iron roofing.  The houses are generally about 3 metres wide, with minimal spacing between them.  Each is clearly numbered.  Many are painted in bright colours.  Most appear to be reasonably well maintained and regularly used.  Some have boat ramps, and others have boats tied up at the front of the houses, or parked on trailers behind the house.  While these buildings are frequently described as boat houses, they look much like holiday houses.

The Bailey’s Beach boat houses are on the waterfront to the west of the end of Cunningham’s Road.  There are approximately a dozen closely spaced boat houses here.  In contrast to the Campbell’s Cove structures, materials vary (including brick, corrugated iron, timber and fibro, with iron roofing), despite a similarity in appearance and form.  Most have wide and high double doorways on the waterfront elevation, with few additional openings.  Each of the structures has its own concrete boat ramp with foundations of stone boulders, and some have small jetties.  A number are set into the slope above Bailey’s Beach, so that when approaching from the beach track, they appear almost level with the ground surface.  Generally, the group of structures is in good condition with many signs of maintenance, regular use and care.

The groups of privately-owned boatsheds and slipways at Bailey’s Beach and Campbell’s Cove, Werribee South, are among a number of groups of similar structures erected around the coastal areas of Port Phillip Bay.  These structures have historical and landscape interest, form part of the community life of the areas and contribute to the income of the management bodies.  However, major conflict has arisen over such issues as erosion, drainage, disposal of sewage and public access to beaches.

The South Werribee structures, known locally as ‘fisherman’s shacks’, have provided low cost ‘holiday houses’ for families from the inner suburbs, unable to afford housing at resorts like Portsea or Sorrento.

The South Werribee group is located on Crown Land (portion of Public Purposes Reserve) in an area that stretches from the east side of the Werribee River to west of the RAAF Base at Point Cook.  Construction of beach structures at Bailey’s Beach began in the late 1920s and during the 1940s and 1950s extended eastwards to Campbell’s Cove.

The history of this mixed group of boatsheds and slipways is told in Lands Department Reserve files relating to control and management of Bailey’s Beach and Campbell’s Cove areas.  On 26 September 1930, the Board of Land and Works placed the Werribee Foreshore Reserve under the control of the Shire of Werribee as a Committee of Management.

Regulations for the care, protection and management of the Reserve, drawn up by the Board of Land and Works, were gazetted on 25 March 1931.  These regulations laid down strict rules about how the boatsheds and slipways should be constructed.  Construction was supervised by the Ports and Harbours Branch of the Public Works Department.  Under the 1930s rules it was absolutely forbidden to ‘use or cause to be used any buildings, bathing box or boat house in the Foreshore Reserve for residential purposes’.

However, inspections conducted over the years confirmed that not only were the rules relating to construction standards not adhered to, buy the majority of structures were used for both temporary and more permanent habitation and were often used as ‘holiday houses’.

From the late 1920s, portion of the Werribee Foreshore Reserve was used by the public for bathing and two public dressing enclosures were built on the beaches near Crown Allotment 61A at Duncans Road.  An early c1930 map shows early boatshed sites at Bailey’s Beach also known as Crawford’s Beach.

The greatest increase in the construction of private boatsheds and slipways was in the years after the Second World War, at Bailey’s Beach and further east Campbell’s Cove, ‘named after the first boatshed owner’.  The Bailey’s Beach buildings were cut into the cliff face.  By October 1944 it was reported that at least four had been constructed in this way.

On 22 November 1950 the Werribee Shire Secretary wrote to the Lands Department about Campbell’s Cove, seeking its attitude to ‘those sheds being used for residential purposes, it having been recently ascertained by inspection that one at least had a chimney while another had curtains and had the appearance of being inhabited’.  It was stated that ‘mostly week-end fishermen were concerned and that some structures were unauthorised’.  The Shire was informed that ‘in no circumstances could residential use be condoned’.

However by January 1951, it was reported that, ‘the boatsheds are being licensed by Council under its powers as a Committee of Management of the foreshore’.  By this time there were about 30 boatsheds and seven slipways and at least 100 boatshed sites, surveyed, and with licences to occupy with an annual fee of £2 2s.

The Shire Secretary said that ‘owing to the heavy demand for sites’, Council had decided to have the foreshore at Campbell’s Cove  ‘resurveyed into larger lots and leaving open spaces 30 feet wide at intervals to minimise fire risks – reallotting sites and the transfer in some cases to a new area being surveyed easterly towards Point Cook’.

It was thought that slipways should be permitted to continue but should be ‘placed at convenient distances without obstructing the beach’.  The boatsheds and slipways at Bailey’s Beach had ‘been on that site for many years’ as they were ‘built partly in the cliff … are causing little or no obstruction’.  Nevertheless, a later 1955 report claimed that the 12 sites, ‘excavated into the high cliff bank, below the top of the cliff but above beach level’ were aggravating erosion.

A list prepared by Werribee Council in July 1963 shows the kinds of people occupying the 164 sites at Campbell’s Cove and 19 at Bailey’s Beach. The majority came from inner suburbs such as Brunswick, Coburg, Thornbury, Essendon, Pascoe Vale, Yarraville and Sunshine.

An inspection of slipway sites a year later, in October 1964, described them as constructed of timber, concrete, malthoid and metal ‘many in a bad state (and) a danger to the general public’.

A detailed report on private boatsheds and their sites prepared by the Shire of Werribee the same month confirmed that the condition of these structures was in general very poor.  Many had been ‘erected with second hand materials’.  Sanitary conditions at Campbell’s Cove and Bailey’s Beach were poor.  Each boathouse has a pan closet on the Road Reserve or attached to the boathouse that had to be ‘disposed of on reserve’.   Most of the boatsheds were ‘nothing short of combined kitchens and bedrooms, and the likelihood of boats being stored therein was extremely remote’.  About 75% of the boathouses provided temporary accommodation without a boat being housed there; about 10% were temporary residences with boats.  Only 16 of 152 boatsheds at Campbell’s Cove conformed to the regulations.  In the 1960s, Darryl Wells recalls helping with milk deliveries three times a week, and also delivering bread and papers during the Christmas holidays.  Since that time, a number of the sheds have been destroyed by fire.  Because of their close spacing, there were often up to three sheds alight by the time the local CFA arrived.

Another report claimed that ‘site holders are using their boat sheds as holiday homes contrary to the Health Act and the Foreshore Regulations and do not use them to house boats’.

A surviving map (undated) of ‘Boat shed sites, Campbell’s Cove, Shire of Werribee’ shows about 152 sites with the names of some of the occupiers.

Finally, in November 1967, a public meeting was held attended by representatives of the Port Phillip Authority and occupiers of 120 of the 172 buildings on the Werribee foreshore.  A Campbell’s Cove- Bailey’s Beach Development Committee was formed, consisting of six members with Ron Boase of Brighton as Chairman.  The Authority promised to assist the new committee in ‘cleaning up, improvement and development of the beaches’.

The South Werribee boatsheds at Campbell’s Cove and Bailey’s Beach were among the groups of structures considered in a 1985 report on ‘Bathing boxes, boat sheds and similar structures around Port Phillip Bay’ prepared by the Heritage Unit and the Coastal Unit of the Ministry for Planning and Development.

The Campbell’s Cove group was described as ‘a collection of sheds, varied in character and used primarily for boat storage and accommodation associated with amateur fishing’.  Stylistically, the sheds were described as ‘originally of similar form to those located elsewhere around Port Phillip Bay.  They have been modified and extended with windows and verandahs built on the front, and water storage tanks added to provide residential accommodation in the summer months’.  It was claimed that ‘many are in a poor state of repair, and they dominate the shore visually and physically with jetties and ramps extending into the water’.