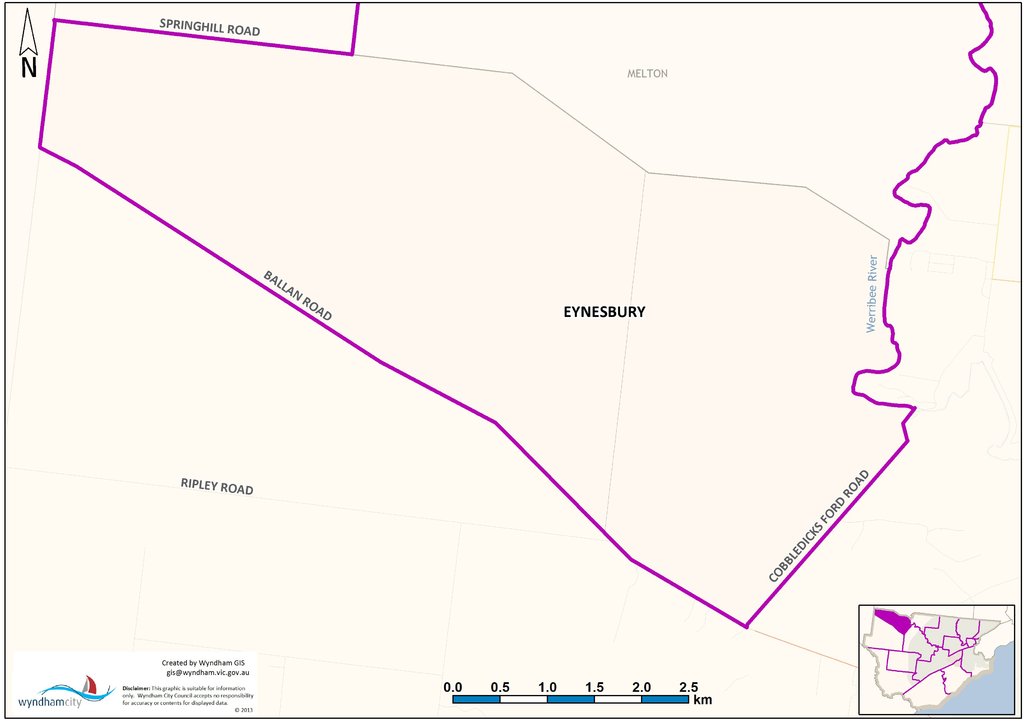 Eynesbury is named for the Eynesbury Homestead built in 1875.  It is thought the estate was named after the village of Eynesbury in Cambridgeshire, England.

Son of pioneer pastoralist Simon Staughton, Samuel Thomas Staughton built Eynesbury homestead on land that was once part of his fathers Exford run.  By the end of the 1850s the big landholders were forced to divest themselves of large parcels of land when the government, under the auspices of the Closer Settlement Board, sought to provide for the thousands of men and families who had migrated during the gold rush.

Today the original property forms a large part of Melton, 30,600 acres having been subdivided from the original run in 1852, and Exford, Eynesbury, Nerowie and Staughton Vale are outside the present boundary of the Wyndham Shire.

When Simon Staughton died in 1863 his four sons inherited the still-large estate and divided it into four grazing properties each with its own homestead. When Samuel Staughton built the homestead Eynesbury it was well inside the Shire and the family played a significant role in its early development.

The name of Staughton appears regularly alongside Armstrong, Beamish, Chirnside, Ison and Wedge, among others, in matters of Council affairs and in the many social, community, church and sporting activities right across the Shire in the early days.

Eynesbury homestead is an elegant bluestone homestead, built 1871-75; unusual in its combination of the central double-storied section of Georgian proportions, flanked by two single-storied Victorian wings on either side.  In 1947 Eynesbury Station was purchased by M.L and J.M. Baillieu.

Today the house is operated as a reception centre and golf club and new housing estates, bearing the name of Eynesbury, are being developed on nearby open pasturelands.