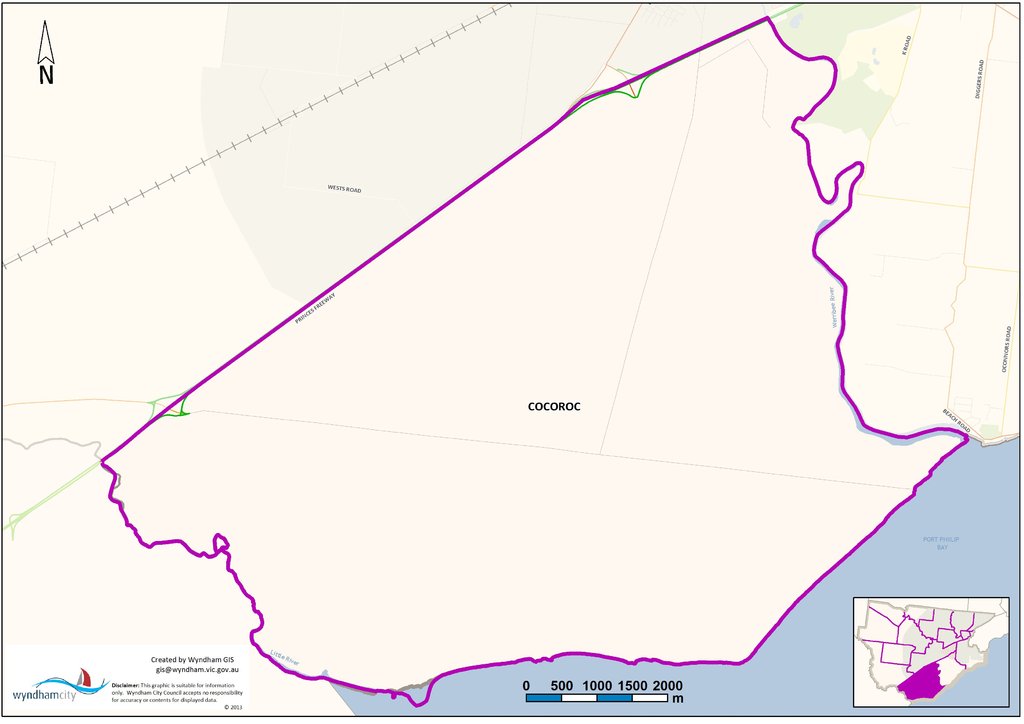 Cocoroc was a small but well-appointed settlement created to house the workers on the Metropolitan Board of Works (MMBW) Farm.

The name Cocoroc comes from the Aboriginal word for croaking frog.  Cocoroc developed as a strong community, with long term family ties to the farm.  There were many families with several generations working on the farm.

The community centre on the Farm Hall, built in 1903, where dances, concerts, community suppers, euchre nights, parties and wedding receptions were held.  The community had its own football oval, cricket pitch, park, local church and post office.

The MMBW built the town a swimming pool, and the cement foundation of this pool is one of the few remnants of the Cocoroc township that has survived into the present.

A small general store, operated by the Taylor family served the community up until the 1930’s, but by the 1940’s the community was served by traders from Werribee who took orders and delivered goods.  Four schools were opened to cater for the children who lived in houses spread out across the farm: the first Cocoroc State School (later Cocoroc North) opened in 1895, Cocoroc South in 1898, Cocoroc West in 1906 and Murtcaim in the far south-western corner of the farm in 1939.

The MMBW provided well for the workers and their families.  Each rented MMBW house was attached to half an acre of land where most tended a vegetable garden.  During the Second World War, land was requisitioned from the MMBW farm to accommodate the influx of United States aircraft and personnel training with Royal Australian Air Force.  Five large aircraft hangers were built to the west of the old Farm Road near Geelong Road.

The Americans carried out machine-gun training and bombing practice at a firing range near the farm foreshore.  After the war the disused hangers were refitted to make accommodation for than 100 migrant workers who were transferred from the Bonegilla camp to supplement the depleted local labour force. The camp closed in 1956.

By the beginning of the 1970’s most MMBW Farm employees had moved into Werribee.  Widespread private ownership of cars enabled the farm-workers to live in town and drive themselves to work.  By 1973 almost all the farm houses had gone and the post office had closed.