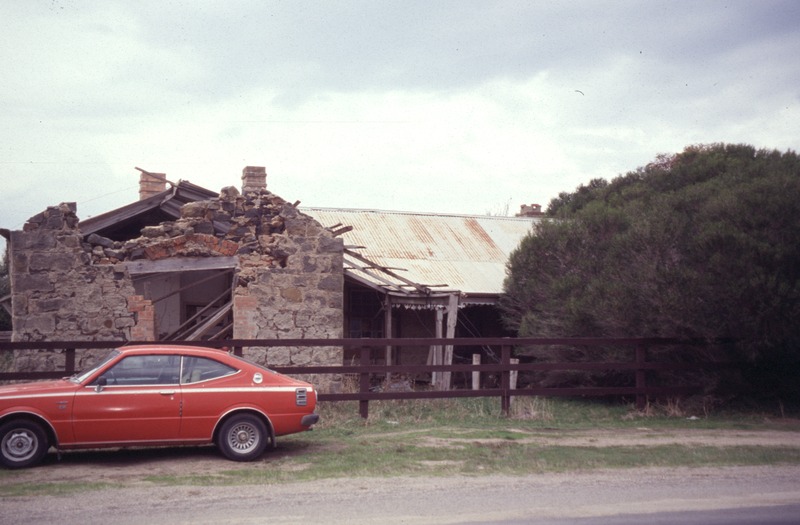 A bluestone L-shaped building with a verandah extending on two sides which is in a derelict state.

The building, of L-shaped plan with gable roof, is constructed of bluestone, rough-hewn to sills and corners, with a verandah extending on two side. Interior linings are timber and hessian. The building is in a derelict state. Features of interest include th sheet metal decorative valence trim, the thick chamfered verandah posts and broad roof trim.

Angus Campbell, Gatekeeper to the Little River Railway, was associated with the early history of this old bluestone house. As early as 1868, Campbell was rated for a selection in the Parish of Bulban. He secured the Crown Grant for Allotment 6 in 1872. A farm and dwelling on this land was rated to Campbell for the first time in the1873-74 South Riding records.

In 1982 the property was rated as a store and dwelling on Allotment 6. The following year, Angus Campbell, gatekeeper, was the sole owner and occupier of the 40 acres. From then it was listed as a farm. And from this date, Berry occupied a dwelling and store on 1/2 acre of land owned by D. McIntosh. This was latter identified as part of Allotment 18 located near the centre of the early Little River township on the corner of Rothwell and Flinders Streets. Campbell was rated for his farm on Allotment6 for the last time in 1896, when James Richmond became the new owner. At the turn of the century, Richmond, whose address was given as "near Warragul", was letting his homestead on 40 acres to Michael Conway and then Thomas Carroll.