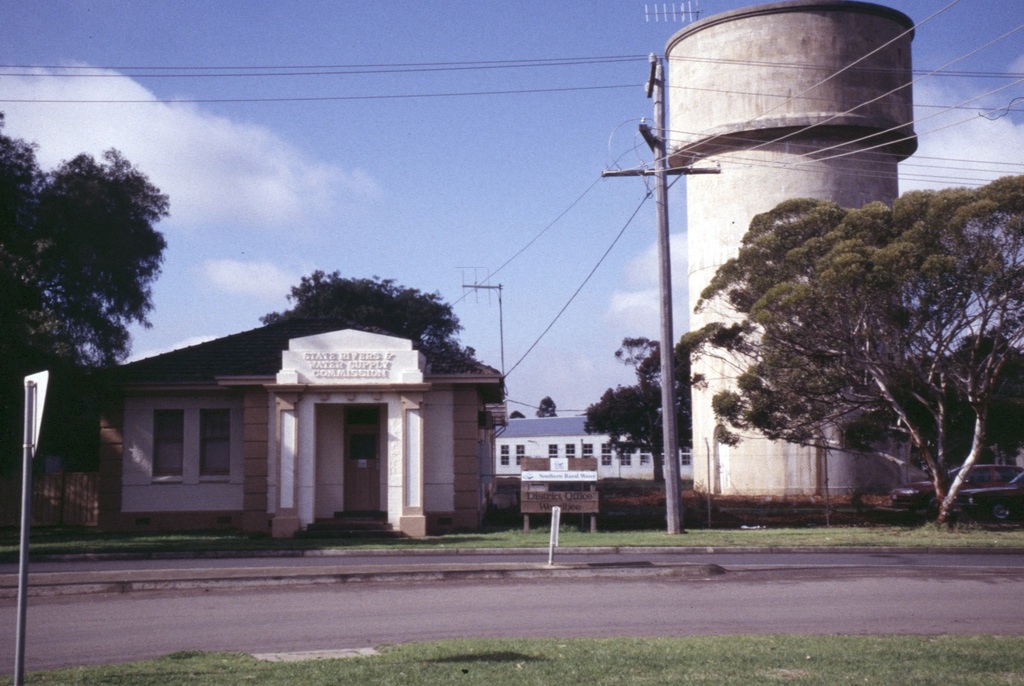 The Werribee Irrigation System comprises a diversion weir, channel, water tower and office building. The diversion weir is a large stone and concrete diversion structure which creates a small pondage area in the Werribee River. Water is channeled along a concrete lined diversion channel, through to the Water Tower on Tower Road. The Channel Reserve is lined with peppercorn trees and is an important landscape feature through this area.

The Water Tower and office, near the corner of Tower Road and Princes Highway, are a prominent landmark in Werribee township. The office is a single storey brick building. The front is dominated by the entry porch with the 'State Rivers and Water Supply Commission' nameplate over it. The office has been altered in apearance by painting of the face brickwork; there is an extension at the rear. The concrete water tower is located next to the office. There are several workshop buildings on the site and two large clumps of peppercorn trees.

As early as the 1860s, local farmers pressed for the provision of an alternative water supply during periods of drought, as a result, three Irrigation Trusts were formed on the Werribee River. The Werribee Irrigation Trust was established in 1888 by members of a land development syndicate who purchased 1468 acres (600 hectares) from Thomas Agar. This land north of the Geelong railway line in the Parish of Tarneit was obtained in order to establish an Irrigation Colony.

In December 1889, the Trust borrowed a large sum of money from the State to be spent on a pumping plant and a weir and channels. The subsequent works consisted of a steam powered pumping plant, 5.5miles of main channel, 7 miles of of spur channels, 44 road bridges and 23 channel stops.

After the syndicate was unable to complete its purchase of the land, George Chaffey, agreed to take over the liabilities and complete the contract with Agar. Chaffey, Chairman of Directors and Mr De Garis, Managing Director of the Trust, proposed that the market garden irrigation colony would supply Melbourne with vegetables, flowers and herbs. However, the Trust collapsed during the depression years of 1890-91.

There were more developments following the creation of the State Rivers and Water Supply Commission after the passage of the Water Act 1905. It was proposed that the Government, which had the necessary capital and supoported the scheme, should take over the Trust's responbilities. The Government at the time supported the association of irrigation with the movement to achieve closer settlement. By 1906 the Government's Land Purchase and Management Board had purchased 23,214 acres from Chirnside's Werribee Park Estate. It had also purchased 55 acres of the Werribee Police Paddock to be set aside for workmen's homes.

In the following years, the Commission carried out numbers of works at Werribee, which helped to establish the district's extensive water channel system.

In 1907, there was a proposal to construct a storage reservoir at Pykes Flat. From this reservoir, stored water would pass down the Werribee River to a diversion weir constructed two miles above the railway bridge at Werribee township. From this weir, a main channel would carry water to the highest part of the Werribee Park and 'then be distributed throughout the metropolitan area by a system of minor channels'.

By 1909 the Werribee Diversion Weir was under construction. The next year, works on Werribee Irrigation Main Channel and the diversion weir were completed. The construction of an earthern stock and domestic channel commenced in the same year.

Between 1912 and 1913, about 5000 acres of land had been subdivided at Werribee, channels had been built and water was being supplied to the allotments already settled. Later between 1914 and 1915, the Urban Water Reticulation Works were completed and the Werribee Urban Trust was proclaimed. Pykes Creek Tunnel was completed in 1916-17. As a result of the completion of works on the Werribee Closer Settlement Estate and the Melton Reservoir, the Werribee Irrigation and Water Supply district was proclaimed.

By 1920-21, the Werribee Irrigation and Water Supply district was extended by 200 acres, given by George Chirnside for subdivision for soldier settelements. An additional 1100 acres was purchased from P.N. Lock for soldier settlement. This land was also developed for irrigation.

Other important works included the concrete lining of the channel systems (1923-25); the construction of a storage by the Water Commission on the Lower Werribee River at Cobbledicks Ford (1937-38); the construction of a weir for storing water for private irrigation on the Little River near the Little River village close to the Melbourne-Geelong railway (1950-51); and the official opening of the Werribee Experimental Station Office on 23 November 1951.

During the 1960s, the Werribee Urban System was connected to the Melbourne and Metropolitan Board of Works to enable 75 per cent of the Werribee Waterworks district to be abolished. In 1962-63, the Werribee Sewerage Authority was constituted resulting in the connection of the system to district houses.

By the early 1980s, the Werribee Irrigation area comprised 3760.1 hectares. A large proportion of the district was required to service State Government authorities. These included the Werribee Park Estate, the CSIRO and the Agriculture Department.

An important result of the development of the district's irrigation system was the etablishment of orchards and lucerne-producing farms and later market gardening and dairying at Werribee South.

From 1925 there was a steady influx of non-British settlers, mainly from Southern Italy, who settled in the Werribee South area. In a study of the Werribee Italian community during the Second World War, Maria Mantello, tells of the importance of irrigation to Werribee's Italian farmers, particularly to the market gardeners of Werribee South and the six Sicilian families who formed a colony within the Werribee Park Estate, which became Corpus Christi - a trianing seminary for Roman Catholic priests.

Werribee South also became a successful location for poultry and dairy farms, associated with the irrigation and soldier settlement schemes.