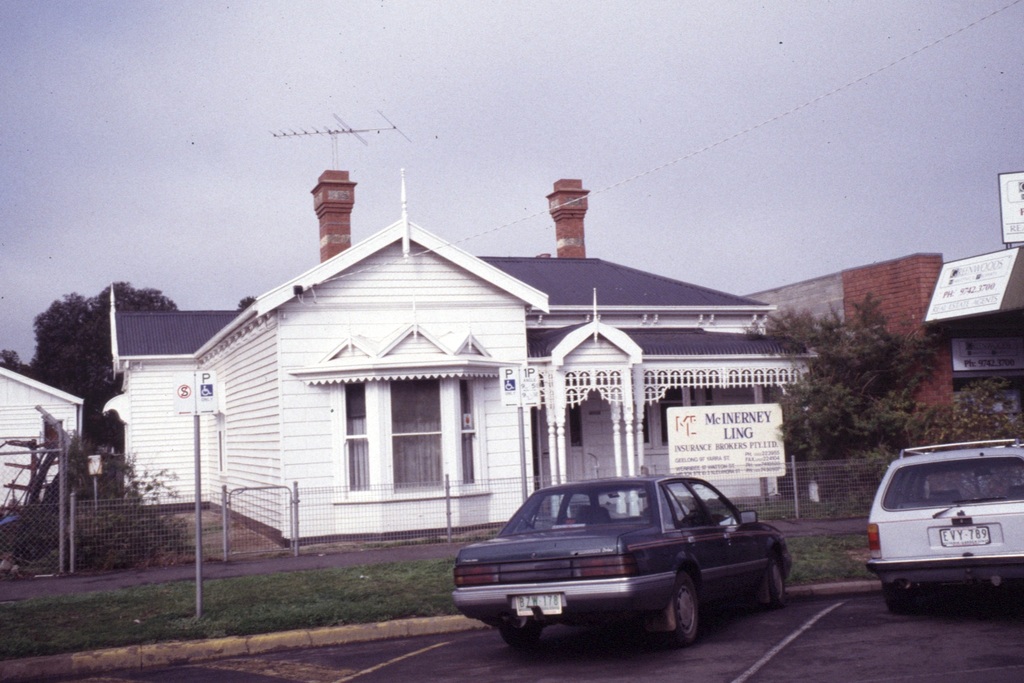 Davis Hardware was a well-known locally as one of Werribee’s earliest shops, with the Davis House (adjoining) being local landmarks.

The Davis Hardware store was a timber building located to the east of the house.  It had a gable roof and large doors on one side.  The building has been extended to the rear.  Parts of the building were clad in corrugated iron.  A bluestone cobbled crossing was on Watton Street.

Miss Davis house is also built of timber.  It was asymmetrical in form with a projecting gable and half verandah.  An elaborate gabled entry to the verandah and gabled detailing over the bay window were distinctive features, uncommon in Werribee.  Externally the house was substantially intact in 1997, retaining its architectural detailing and chimneys.

This residence and small hardware store became one of Werribee’s most important business premises with a long association with the Davis family, who came to the district in 1853.  Henry Davis, commission and insurance agent, who lived at Little River, was the Shire’s first rate collector and assisted the Shire engineer.  He died in 1901.

According to Davis records, the store and residence were built in about 1904 for Herbert A. Davis, Henry’s son and Vera’s father.  He lived with his wife and daughter, their only child who was just two when the family moved in.

In 1905, Herbert A. Davis was rated for two buildings in Allotment 7 of Block 22 in the Werribee township, the site of the buildings at 11-17 Watton Street.  According to Vera, the associated residence was part of one of three cottages moved from the Davis family property at Cowies Hill in the Parish of Tarneit.  Additions were later made to this house.  Two of these cottages were moved to Davis properties in the township, the third remaining at Cowies Hill.  All three reputedly originally came from North Melbourne and are made of fine durable timber.  An Registrar General Office search confirmed that Frederick, Henry and Percy Davis owned the Cowies Hill property in 1899, some two years before Henry’s accidental death.

The Davis family business in Watton Street became a prominent local firm, where father and daughter (trained from childhood in the demanding family business) were known throughout the district for their fair and shrewd advice concerning the buying and selling of properties, both in the township and in rural areas.  Herbert A. Davis also purchased a number of properties for his own family.  The small hardware store acted as a magnet to local farming families, who could purchase a variety of goods there.  It was a popular community meeting place over many decades.

When Herbert A. Davis died in 1949 he left all his property to his daughter, including the Watton Street store and residence.  A cousin, Horrie, subsequently ran the store.  However, Vera continued to work in the family business until she turned 84.  Vera also inherited a number of other shop/residences in the Werribee township, including 83, 85, 87, 97, 99 and 101 Watton Street.

Davis House was demolished in December 2012.